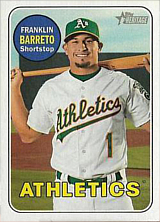 At the age of 18, shortstop Franklin Barreto was a key figure in a major trade following the 2014 season.

Barreto was signed out of Venezuela by the Toronto Blue Jays before the 2013 season. He made his professional debut at 17 with the GCL Blue Jays, hitting .299 with 16 doubles, 6 triples and 4 homers in 44 games. These were outstanding numbers for such a young player, and they earned him a promotion to the Bluefield Blue Jays of the Appalachian League before the end of the year. There, he hit .204 in 15 games. He then was promoted to the Vancouver Canadians of the Northwest League where he continued to wow observers with a .311 average, 23 doubles, 65 runs scored and 61 RBI, all the while playing a key defensive position while over three years younger than the average player in the circuit.

After those first two extremely promising years as a professional, he was a key component in the November 28, 2014 trade that sent All-Star third baseman Josh Donaldson to the Blue Jays from the Oakland Athletics in return for four players. The others were big league third baseman Brett Lawrie, and pitchers Kendall Graveman and Sean Nolin; Franklin was the only one of the four without major league experience, but was considered the prize catch by Oakland, as the replacement for another top infield prospect, Addison Russell, whom the A's traded away earlier that year in an unsuccessful bid to reach deep into the postseason.

Barreto made his major league debut for the A's on June 24, 2017, starting at second base and going 2 for 5 in a 10-2 win over the Chicago White Sox. One of the hits was his first career home run, and he was part of a trio of A's players hitting their first career home run that day: Matt Olson had two long balls, and Jaycob Brugman also hit one. It was the first time a team pulled off the feat since the 1914 Kansas City Packers had done so in the Federal League. He hit .197 in 25 games that first season, with 2 homers and 6 RBIs, then in 2018, played 32 games as he hit .233 with 5 homers and 16 RBIs. The A's played in the Wild Card Game that season, but he was not on the postseason roster. In fact, he spent of that season with the AAA Nashville Sounds, as had been the case in 2017. He played 111 and 77 games in the Pacific Coast League those two years, hitting .290 and .259, but showing good power both years with slugging percentages of .456 and .514.

In 2019, the A's AAA franchise moved to Las Vegas and the renamed Las Vegas Aviators, where he hit .295 in 98 games, with 29 doubles and 19 homers, 88 runs, and 65 RBIs. There was clearly not much left to prove for him at that level, but he still couldn't break through in the Show, being limited to 23 games and hitting just .123. He once again was left off the postseason roster. It was more of the same at the start of 2020 season, albeit there was no minor league affiliate for him to be assigned to, due to the Coronavirus pandemic. He did spend the first month of the delayed season with the major league team, but only saw action in 15 games, getting a mere 10 at-bats. Marcus Semien had established himself as one of the best shortstops in the majors, and while second base was probably the A's weakest position, they were somehow reluctant to give Franklin an extended look to show his mettle while they were contending for a division title. Something had to give, and on August 28th, he was traded to the Los Angeles Angels in return for veteran Tommy La Stella, who was having his second straight excellent season with the last-place Angels.