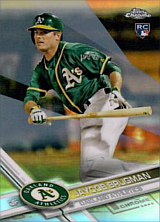 Jaycob Brugman hit his first major league home run for the Oakland Athletics in a 10-2 win over the Chicago White Sox on June 24, 2017. He was one of a trio of A's players to hit their first career homer in that game, with Matt Olson going deep twice and Franklin Barreto homering in what was his big league debut. It was the first time a team had pulled off the feat since the 1914 Kansas City Packers had done so in the Federal League. In 48 career big league games spread over two months with Oakland, Brugman batted .246/.346/.343 with 3 homers and 12 runs scored.