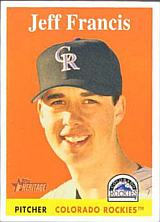 Jeff Francis was drafted in the first round (9th overall) in the 2002 amateur draft by the Colorado Rockies after playing college ball at the University of British Columbia [1] from 2000-2002. [2] He was signed by scout Greg Hopkins and made his pro debut that summer. His first season ended early as he was hit by a ball hit back through the box and suffered a concussion while pitching for the Asheville Tourists.

Francis tied a Rockies team record for most consecutive winning decisions with six. The record is shared by Darren Oliver. He was the ace of the staff in 2007 when the Rockies made their only appearance in a World Series. He went 17-9 during the season, won a game in each of the first two rounds of the postseason, but was battered around by the Boston Red Sox in Game 1 of the World Series, giving up 6 runs on 10 hits in 4 innings.

The Kansas City Royals signed Francis as a free agent in 2011 in a move that baseball analyst Dave Cameron called the best free agent signing of the year. He did have a decent year with Kansas City, in spite of going 6-16, as his ERA was 4.82 in 31 starts (a 91 ERA+); he pitched 183 innings and his K/BB ratio was 91/39. He returned to the Rockies as a free agent in June of 2012, having spent the first two months of the season in the Cincinnati Reds' system with the Louisville Bats. He improved to 6-7 in 24 starts, although his 5.58 ERA was on par with the rest of the Rockies' dreadful pitching staff that year. The Rockies decided to move to a system whereby their starters only threw 75 pitches per outing, which limited the number of decisions by these pitchers, in addition to their innings pitched (Francis only pitched 113 in his 24 starts, or 4 2/3 per start). Francis by then was a completely different pitcher from the one who had led the Rockies to the World series. He threw his fastball around 91-93 mph in those days, but his velocity was down to the low 80s by the early 2010s. He now relied on the location of a curveball and change-up and outstanding control to keep opposition hitters off-balance. He also worked very fast, emulating former teammate Josh Fogg, as a way to keep opponents from finding a comfort zone when facing him.

In 2013, he went 3-5, 6.27 in 23 games for the Rockies, including 12 starts, also spending time in the minors with Colorado Springs. He was released after the season and signed with the Cincinnati Reds for 2014. He started the season with the Louisville Bats, where he was 4-3, 3.33 in 8 starts, then was called up to Cincinnati to start the second game of a doubleheader on May 15th, which he lost, 6-1, to the San Diego Padres. The Reds placed him on waivers after the game and he was picked up by the Oakland Athletics, who put him in the bullpen. Used in mop-up duties, he gave up runs in four straight outings before recording his first career save on June 29th. It came in the 14th inning of a 7-6 win over the Miami Marlins, when he relieved Jim Johnson with the bases loaded and one out; he struck out Jarrod Saltalamacchia and got Donovan Solano to pop up to end the game.

Francis split the early part of the 2015 season between the Blue Jays and their AAA Buffalo Bisons affiliate. He joined Team Canada for the 2015 Pan American Games, his first stint with them since the 2006 World Baseball Classic. He saved Chris Leroux's 4-1 win over the Dominican national team and Shawn Hill's 3-1 win over Cuba (in both games, he relieved Andrew Albers and went 1-2-3). He got a start in the Gold Medal game against Team USA (facing Josh Hader) as Canada tried to become the second nation (after Cuba) to win multiple Golds in baseball in the Pan American Games, defending their 2011 Gold. Jeff allowed a two-run homer to Patrick Kivlehan in the second and another run in both the third and the seventh. Albers relieved him with a 4-4 tie in the 8th; Canada went on to win 7-6 in 10 innings, Leroux getting the crucial win.