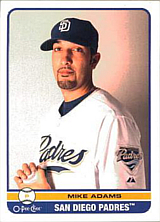 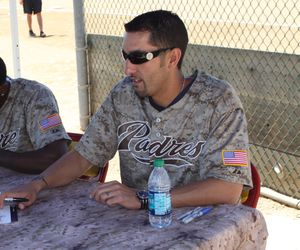 Mike Adams was a solid set up man and closing option for several teams between 2004 and 2014.

Mike made his big league debut with the Milwaukee Brewers in 2004. He split time with four different teams (only appearing with two in the majors) in 2006. He started the season with two games for the Brewers, then was sent down to the minors and traded to the New York Mets for Geremi Gonzalez on May 26. The Mets placed him on waivers on July 7, and he was claimed by the Cleveland Indians, who in turn traded him to the San Diego Padres for Brian Sikorski on July 18. He found his greatest success with the Padres starting in 2008, when he put up a 2.48 ERA in 54 games. He followed that with a minuscule 0.73 ERA in 37 games in 2009 when he became the primary set-up man for closer Heath Bell. In 2010, he had a 1.75 ERA in 70 games, then in 2011, posted a 1.12 ERA in 48 appearances by the end of July, confirming his position as one of baseball's best table setters. On July 31st, the Texas Rangers acquired him in a trading deadline deal, sending minor leaguers Robbie Erlin and Joe Wieland in return. Following the 2012 season, he signed as a free agent with the Philadelphia Phillies, finishing his career with two years in their bullpen.

Though not a huge name, Adams finished with one of the lowest ERAs ever among pitchers with 400 or more career appearances with a 2.41 mark. He sits among names like Mariano Rivera (2.21 ERA), Billy Wagner (2.31 ERA) and Jonathan Papelbon (2.44 ERA).