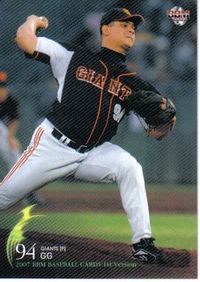 Geremi Gonzalez was a good young hurler who emerged out of a bad Chicago Cubs minor league system in early 1997. Geremi showed promise in his rookie year, posting an 11-9 record and logging 144 innings. Many felt he deserved more support for the 1997 National League Rookie of the Year Award.

He was known as Jeremi or Jeremy Gonzalez at the time, only switching to the Spanish spelling of his name when he joined the Milwaukee Brewers in 2006. 1998 opened with Geremi performing nicely through 20 starts. Unfortunately, he tore up his knee late in the season and missed all of 1999 and 2000 before finally resurfacing in South American winter ball in 2001. He looked to be headed back to the Cubs as a potential member of that year's rotation, but once again suffered a knee injury. Management saw this injury as Geremi's fault, as they felt he was playing hurt, and he was released soon after.

A healthy and productive Geremi re-emerged again in 2003, only this time for the lowly Tampa Bay Devil Rays, where he was probably the best pitcher on a very bad team. But as had been Geremi's downfall over the years, the old injury bug bit him again in later years and kept him off the mound more than on.

Gonzalez ended his major league career with 21 Win Shares, mainly in 1997 and 2003. His main teammates were Mark Grace, Sammy Sosa and Aubrey Huff.

Gonzalez signed with the Yomiuri Giants in May of 2007. He debuted for them on June 14th and allowed 4 runs on 4 hits in 6 innings in a win over the Orix Buffaloes. He was 1-2 with a 6.52 ERA in five games for the Giants that year.

In 2008, he was back in his native Venezuela and had played for for the Magallanes Navigators in the 2007-08 Venezuelan League. On May 25, he was struck by lightning in a freak accident on a beach near Maracaibo and died. He was 33.