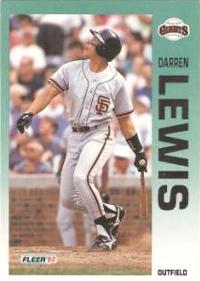 Darren Lewis had a 13-year career in the major leagues as a result of his speed and his glove, although he typically had a low batting average and little power. Between the start of his career in 1990 and 1994, he played 392 consecutive games in the outfield without committing an error. That record was eventually broken by Nick Markakis in 2015, but Lewis still holds the record for most errorless games from the start of his career.