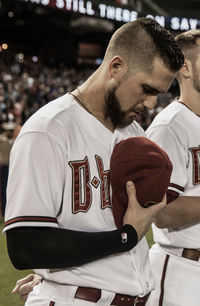 Ender Inciarte is an outfielder who made his major league debut in 2014.

In the off-season, the Philadelphia Phillies took him in the 2012 Rule V Draft, with the 10th pick. He was the 4th position player chosen, after Chris McGuiness, Alfredo Silverio and Jeff Kobernus. Inciarte had a good spring and beat out Darin Ruf for the final big-league roster spot. He was in uniform for the Phillies only for Opening Day, however -- the team claimed Ezequiel Carrera off waivers and returned Inciarte to the D'Backs organization. He hit .281/.327/.362 for the Mobile BayBears, stealing 43 bases in 51 tries. He was 8th in the Southern League in average (just between Matt Szczur and Jaime Pedroza) and first in steals (5 more than runner-up Keenyn Walker). He led Arizona farmhands in swipes, 11 ahead of #2 Tony Campana. That winter, he hit .300/.363/.384 with 47 runs and 21 steals (in 27 tries) in 63 games for Zulia, while having 13 outfield assists. He won a Gold Glove in the Venezuelan League, joining Jose Pirela and Alex Romero as the outfielders picked. He finished 9th in runs and tied Ezequiel Carrera for first in steals.

In November 2013, Arizona added Inciarte to its 40-man roster. At age 23, he still had an excellent chance to shed his "phantom major leaguer" tag, and indeed he did so early in the 2014 season when he made his big league debut on May 2nd against the San Diego Padres. He started 2014 well for the Reno Aces (.321/.367/.440, 22 R, 7 SB, 5 A in 26 G) and was called up when Roger Kieschnick was demoted. In his MLB debut on May 2nd, he hit 8th and played center field against the San Diego Padres. He grounded out against Andrew Cashner in his first at-bat, lined out the next time, grounded out versus Tim Stauffer and singled against Dale Thayer to finish 1 for 4. He ended up playing 118 games and was the team's most used centerfielder. He hit .278 and scored 54 runs. On April 10, 2015, he played the hero in a 4-3 win over the Los Angeles Dodgers: with one out and runners on the corners in the 10th, the Dodgers played a rare defensive shift against him, bringing RF Yasiel Puig to play along the third base line as a fifth infielder, but he defeated the scheme by pulling a ball inside the first base line to drive in the winning run. He then followed that with a career-best four-RBI game against the San Diego Padres on April 13th, thanks to a pair of doubles and a triple, to lead the D-Backs to an 8-4 win. It was the prelude to a very solid season in which he was a regular outfielder for the D-Backs, seeing most of his playing time in right field. In 132 games, he hit .303 and scored 73 runs, while hitting 27 doubles and stealing 21 bases. On December 8th, however, he was traded to the Atlanta Braves along with two prospects, SS Dansby Swanson, the top pick in the 2015 amateur draft and P Aaron Blair, in exchange for Ps Shelby Miller and Gabe Speier.

Inciarte's career with the Braves started off on the wrong foot, as he suffered a pulled hamstring in the first week of 2016 and had to go on the disabled list. However, after he returned on May 7th, he played quite well in 131 games, hitting .291 with 3 homers and 29 RBIs, but especially 85 runs scored. His defensive play was also outstanding, earning him the Gold Glove as the National League's best defensive center fielder. After the season, the Braves signed him to a five-year extension worth $30.5 million. He set a number of firsts in the Braves' 2017 home opener at brand new SunTrust Park on April 14th against the San Diego Padres. Batting lead-off for Atlanta, he recorded the first hit and scored the first run in the history of the ballpark in the 1st inning, then in the 6th hit the first homer there. He had hit a pair of homers in his previous game, which gave him three for the year after less than two weeks, matching his previous season's total already. On June 4th, he had a career game, collected 5 hits and as many RBIs in a 13-8 win over the Cincinnati Reds. He was named the Braves' sole representative at the 2017 All-Star Game. Although he was having a fine season of his own, it was also a function of Atlanta's two best players in the first half not having played enough to deserve the honor: 1B Freddie Freeman had gone down with a wrist injury after tearing up the National League for six weeks, and his replacement, Matt Adams, had done almost as well in his six weeks with the team, but neither had played enough to warrant the honor. On August 30th, he collected 8 hits in a doubleheader that the Braves swept against the Philadelphia Phillies. By going 8-for-10 in the two games, he came up one hit shy of the major league record of 9, last accomplished by Lee Thomas in 1961. He managed to raise his batting average from .301 to .310 that day.