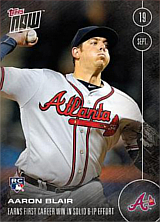 Pitcher Aaron Blair was selected by the Houston Astros in the 21st round of the 2010 amateur draft but did not sign, opting to attend Marshall University instead. He was then taken by the Arizona Diamondbacks in the first round of the 2013 amateur draft and made his pro debut that summer with the Hillsboro Hops. He also played for the South Bend Silver Hawks that first season, putting up an overall record of 1-3, 3.14 in 11 starts and 48 2/3 innings. He started 2014 back with South Bend, then was promoted twice during the season, first to the Visalia Rawhide of the California League and later to the Mobile Bay Bears of the Southern League. His combined record was 9-5, 3.56 in 27 starts and he pitched 154 innings, striking out 171 opponents. In 2015, he began the season with Mobile, then on June 17th moved up to the Reno Aces of the Pacific Coast League, reaching AAA. He had another good year, with a record of 13-5, 2.92, logging 160 1/3 innings and punching out 120 batters.

On December 8, 2015, he was included in a major trade, joining outfielder Ender Inciarte and top prospect Dansby Swanson in heading to the Atlanta Braves for pitchers Shelby Miller and Gabe Speier. Aaron made his major league debut three weeks into the 2016 season, on April 24th, when he started and lost a game against the New York Mets, 3-2. He gave up a run in the 1st inning before retiring anyone, then settled down until the 6th when he gave up a pair of one-out runs before being relieved by Alexi Ogando. While the Braves were hoping he was ready to contribute immediately, his maiden season was a tough one. He stayed in the rotation until the end of June, but was 0-5 with a 7.99 ERA in 11 starts and was sent down for a spell. He returned August 28th to start against the Seattle Mariners, but he gave up 5 runs in 4 innings to drop to 0-6, 8.23. With the minor league season coming to an end, the Braves decided to move him to the bullpen in order to have him pitch in less stressful situations. He worked with pitching coach Roger McDowell on a revised windup and it paid off when he returned to the mound on September 19th as he notched his first career win, 7-3, over the New York Mets. In the game, he gave up 2 runs over 6 innings. He finished the year at 2-7, 7.59.

In 2017, Blair made just one start for the Braves, which happened to be his final big league appearance. It came July 26th against the Arizona Diamondbacks and he gave up 5 runs in 3 innings, being charged with a 10-3 loss. He made 25 starts for the Gwinnett Braves, where he was 7-9, 5.02. He began the 2018 season with the re-named Gwinnett Stripers and made one start on April 11th, when he gave up 3 unearned runs and 5 walks in 2 2/3 innings. He had to undergo shoulder surgery shortly afterwards, wiping out the rest of his season. On May 31, 2018, the Braves released him, although it was characterized as simply a roster move, as they made it clear they were interested in re-signing him when he would be healthy enough to pitch again. He has not re-appeared in professional baseball since.