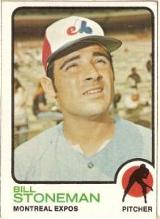 Bill Stoneman pitched eight seasons in the majors, most notably for the Montreal Expos, and was later General Manager of the Expos and Los Angeles Angels.

Selected by the Chicago Cubs in the 31st round of the 1966 amateur draft, Stoneman was in the majors with the team the following summer. He made 46 appearances, primarily out of the bullpen, for the Cubs before being selected by the Expos in the 1969 expansion draft. Installed in the Montreal rotation, he pitched a no-hitter against the Philadelphia Phillies on April 17, 1969, in just the tenth game in franchise history; it was also his first career complete game. He pitched 5 shutouts that season, but was wildly inconsistent, as he ended up with a record of 11-19, 4.39 and led the National League with 123 walks and 12 hit batsmen.

In five years with Montreal, Stoneman was a mainstay of the rotation. He won 17 games in 1971 and was a National League All-Star the next summer. Also in 1972, he threw a second no-hitter on October 2nd against the New York Mets. That contest was the final complete game of his career, making him the only major leaguer to throw no-nos in both his first and last complete game.

Following his playing days, Stoneman worked in the Expos front office from 1984 to 1999. He was Vice-President for Baseball Administration, and later Vice-President for Baseball Operations. He was General Manager of the team briefly in 1987 and 1988 and assistant GM of the club from 1991 to 1999. In November 1999, he became GM of the Angels, a position he held until 2007, including for the Angels' only World Series title in 2002. In 2008 he was named a Senior Advisor for the Angels. On July 1, 2015, he returned to his old job as Angels' GM on an interim basis after Jerry Dipoto had resigned abruptly. On October 4th, the final day of the season, the Angels announced that they had hired Billy Eppler to be their new GM.

Following Stoneman's 1969 no-hitter in Philadelphia, no other visiting pitcher would throw a nine-inning no-hitter in the City of Brotherly Love for 45 years, until Josh Beckett of the Los Angeles Dodgers on May 25, 2014.