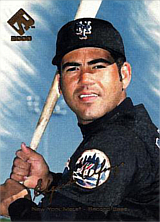 Edgardo Alfonzo played 12 seasons in the big leagues. He hit over .300 several times, with a high of .324 in 2000, and he slugged 146 home runs with a high of 27 in 1999. He primarily played third base (889 games) and second base (549 games). His best seasons came as a member of the New York Mets. On August 30, 1999 he became the first player in Mets history to have a six-hit game, doing so in a 17-1 win over the Houston Astros; he also hit three homers that day for the only time in his career and scored six runs, which tied the major league mark for a single game.

Nicknamed "Fonzie", Alfonzo primarily wore number 13. He showed talent early in his playing days, hitting .331 in Rookie ball in 1991 and .356 for the Pittsfield Mets in A Short-Season in 1992. He was considered a strong clutch hitter, launching a two-run home run in his first at bat against the Cincinnati Reds in a 1999 National League Wild Card one-game playoff and staking Al Leiter all the support he would need in a Mets shutout. The next night, Fonzie took future Hall of Famer Randy Johnson downtown in the 1st inning of the Mets' NLDS duel with the Arizona Diamondbacks, then slugged a grand slam to break a 4-4 tie in the 9th and stake New York to another win.

Following two seasons that were decent, but not at his peak 1999-2000 performance level, Alfonzo was allowed to leave via free agency and joined the San Francisco Giants for 2003. Despite flashes of his old self in 2004, he washed out of the bigs after a cameo with the Toronto Blue Jays in 2006. In February 2009, he signed a one-year contract with the Yomiuri Giants in Japan. He debuted on Opening Day, hitting 6th between Seung-yeop Lee and Shinnosuke Abe, and went 1 for 4. He was released after the season and last played in 2012 in the Chicago White Sox system.

He joined the Brooklyn Cyclones coaching staff in 2016 as bench coach, then managed the club from 2017 to 2019, winning the New York-Penn League title in his last year. In 2020, it was announced Fonzie would be inducted into the New York Mets Hall of Fame, along with pitchers Ron Darling and Jon Matlack.