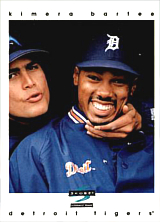 Kimera Bartee played parts of six seasons in the majors. Of his 243 big league games, 110 came in his rookie season of 1996, when he was a Rule V selection by the Minnesota Twins from the Baltimore Orioles and subsequently flipped to the Detroit Tigers. He struck out in 141 of his career 416 at bats, meaning in every 3 at bats, he was punched out at least once.

He played in the 1991 College World Series with Creighton University.

In 2021, Bartee started the season as a baserunning and outfield instructor for the Tigers. When coach Chip Hale left the team in mid-season to become head coach at the University of Arizona, Kimera replaced him as first base coach. He was slated to return in this capacity in 2022 when he died suddenly in December while visiting his father at home in Omaha, NE.