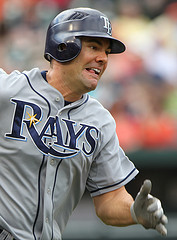 Casey Kotchman is a first baseman who was a much-heralded prospect in the Anaheim Angels minor league system. He had a brief trial with the team in 2004, hitting .224 in 116 at-bats. Apparently the Angels had a deal in place to trade him to the Kansas City Royals at the 2005 Trading Deadline for Mike Sweeney, but that fell through. The proposed deal originally was reported by LA Times.

During spring training in 2007, the Angels turned three triple plays, an unusually high amount, and Kotchman was involved in all three. He had his best season that year, hitting .296 with 37 doubles and 11 homers in 443 at-bats. In mid-season 2008, he was traded to the Atlanta Braves in the deal that brought Mark Teixeira to Los Angeles. He was hitting .287 in 100 games at the time, but struggled with the Braves, being limited to a .231 batting average with 2 home runs in 43 games, mostly due to his .149 average through the first 22 games with Atlanta. Still, he retained his job as the Braves starting first baseman in 2009, but only until the trading deadline. On July 31, the Braves sent him to the Boston Red Sox as they re-acquired their former starting first baseman, Andy LaRoche. For his part, Kotchman became a bench player for the Sox, mainly being used as a pinch hitter and late-inning defensive replacement as Kevin Youkilis and Victor Martinez shared the playing time at first base.

Kotchman had 274 consecutive errorless games at first, from 2008 to 2010. He broke Kevin Youkilis's record by 36. He also set a major league record by handling 2379 total chances flawlessly at first base during that streak.

His father Tom Kotchman has been a minor league manager from 1979-2012 and his uncle Randy Kotchman spent two years in the minors. Casey had hit .370 with 11 runs as Team USA's first baseman when they won their first World Youth Championship; he tied Kevin Melillo for third on the team in runs, behind Michael Hollimon and Tony Richie.