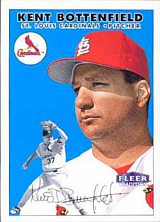 Pitcher Kent Bottenfield was your run-of-the-mill journeyman who dazzled in one shining season in 1999, posting an 18-7, 3.97 mark in 31 starts with the St. Louis Cardinals and making a surprise appearance in the All-Star Game. After the season, he was dealt to the Anaheim Angels (with Adam Kennedy) for Jim Edmonds. Kennedy was a key contributor to the Halos' lone World Series-winning team, Edmonds continued to star for several more years and Bottenfield made 21 starts, returning to his pre-All-Star form, before being flipped to the Philadelphia Phillies for Ron Gant at the trading deadline. After 13 games with the Houston Astros in 2001, Kent was finished.

He was the first pitcher to face the Colorado Rockies at Mile High Stadium, pitching for the Montreal Expos on April 9, 1993. He gave up a home run to the first batter he faced, Eric Young.

Bottenfield became the first Associate Head Baseball Coach for Palm Beach Atlantic University in 2012, then head coach in midseason following the passing of Gary Carter. He and Carter were teammates with the Expos in 1992. He is the brother of Keven Bottenfield, who played in the minors from 1986 to 1988.