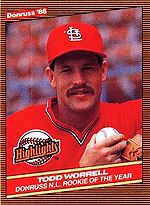 Todd Worrell is a former Major League Baseball relief pitcher who played for the St. Louis Cardinals and Los Angeles Dodgers from 1985 to 1997.

A hard-throwing reliever, Worrell was signed as a 1st round pick in the 1982 amateur draft by the Cardinals and scout Steve Flores. He emerged in late August 1985 as the Cardinals’ closer, after the loss of Bruce Sutter to free agency. Worrell saved 5 games down the stretch and compiled an earned run average of 2.91, then pitched effectively in the postseason against the Dodgers in the 1985 NLCS and the Kansas City Royals in the 1985 World Series. He was still eligible as a rookie the following season, and his 9-10 record with 36 saves netted him the 1986 National League Rookie of the Year Award, as well as the Rolaids Relief Man Award. Worrell became the first relief pitcher to save 30 or more games in each of his first three full seasons.

On September 4, 1989, Worrell was pitching for his 125th career save, which would have tied him with Sutter for the Cardinals’ career record. While making a pitch, he felt a ligament snap. He underwent elbow surgery in December to repair the damage, then experienced shoulder pain when attempting to come back for the 1991 season and was diagnosed with a rotator cuff tear. As a result, he missed both the 1990 and 1991 seasons due to injuries and rehabilitation.

Worrell came back in 1992 as a set-up man for veteran Lee Smith. At the end of the season he signed as a free agent with the Los Angeles Dodgers, where he struggled for two seasons before regaining his old form and saving 32, 44, and 35 games in the final three seasons of his career and making two of his three career All-Star appearances.

Tim Worrell, a major-league pitcher from 1993 to 2004, is Todd's younger brother. Both attended Biola University.