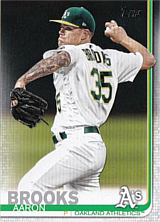 Brooks set his high school's career records for both pitcher wins and homers. As a college freshman, he was 2-3. He had a 6-2, 4.43 record as a sophomore and was 5-7 with a 2.74 ERA and 8 walks in 92 innings as a junior, becoming Cal State San Bernardino's career leader in innings pitched (247 1/3 innings). He had the third-lowest walk rate in the NCAA his junior year. The Kansas City Royals took him in the 9th round of the 2011 amateur draft; the scout was Scott Groot. He made an excellent pro debut with the Idaho Falls Chukars (6-2, 3.84, 73 strikeouts, 8 walks in 79 2/3 innings). He was second in the Pioneer League in ERA (albeit a distant 1.61 behind Taylor Siemens), tied Brandon Martinez for fourth in wins and was 8th in strikeouts. He made the league All-Star team; the other pitchers were Blair Walters, Siemens, Edwin Carl and Raymond Hernandez; Walters was Pitcher of the Year. In 2012, he fell to 9-12, 4.98 with the Kane County Cougars, allowing a .304 average while his control remained sharp (26 walks in 153 2/3 innings). He tied Austin Wood for most losses in the Midwest League, allowed the most hits (15 more than #2 Kyle Ryan), the most runs (99, 8 more than David Goforth), and the most earned runs (85, 7 more than Goforth and J.R. Bradley), tied for second in homers allowed (18) and was 5th in strikeouts (120). In the Royals chain, he tied for 5th in wins, tied for second in losses (two behind Noel Argüelles), allowed the most hits (12 ahead of Mike Montgomery), was second to Montgomery in runs allowed, tied Argüelles for third in earned runs and was 6th in strikeouts (between Kellen Moen and Ryan Verdugo). Brooks improved somewhat in 2013, split between the Wilmington Blue Rocks (2-3, 4.47 in 10 games) and Northwest Arkansas Naturals (7-7, 4.17), walking 22 in 160 innings. He was 5th in the Royals system in wins, tied for 7th in losses, allowed the most hits (173, 14 ahead of Sugar Ray Marimón) and was third in earned runs (76, behind Nathan Adcock and Jason Adam).

Aaron opened 2014 with the Omaha Storm Chasers (0-1, 4.80 in 4 games). He was called up for a brief stay in the majors, between the time Bruce Chen went on the DL Tim Collins came off. In his lone outing in his first stint in the majors, on May 3, 2014, he was roughed up in a two-inning appearance. He replaced Aaron Crow in the top of the 8th with a 3-0 deficit against the Detroit Tigers. He retired Víctor Martínez and Torii Hunter, allowed an Austin Jackson double and struck out Nick Castellanos. In the 9th, Bryan Holaday singled, Danny Worth doubled and Rajai Davis singled in a three-pitch stretch. Ian Kinsler hit a sacrifice fly, Melky Cabrera singled in Davis (who had stolen a base), Martínez singled and Hunter cracked a three-run homer for six runs and one out. Jackson struck out and Castellanos grounded out to avoid making it even worse for Brooks. He was absolutely bombed in his first career start on May 31st, against the Toronto Blue Jays, when he was facing Marcus Stroman, who was also making his first big league start after a few relief outings. Brooks did not make it out of the 1st inning as he gave up 5 hits and 3 walks while getting only two outs, leading to 7 Blue Jays runs and a 12-2 loss. Those were his only two games in the majors in 2014, as he finished with an 0-1 record and a 43.88 ERA. Things went much better for him at Omaha, where he was 12-3, 3.88 in 25 games and 139 innings.

Brooks was back at Omaha in 2015, putting up a record of 6-5, 3.71 in 18 games. He also made two relief appearances for the Royals, one in May and another in June, allowing 3 runs in 4 1/3 innings. On July 28th, he was sent to the Oakland Athletics, along with fellow pitching prospect Sean Manaea, in return for utility player Ben Zobrist. Aaron pitched 11 times for the A's, including 9 starts, going 3-4, 6.71 and logging 51 innings. On February 25, 2016, he was traded again, this time to the Chicago Cubs for outfielder Chris Coghlan. He spent the entirety of 2016 and 2017 in Triple A, splitting time between the Cubs' system and the Milwaukee Brewers. Stuck in Triple A for almost the entirety of 2018, Brooks was called up on August 30th, designated for assignment without making an appearance on August 31st and dealt back to Oakland for cash considerations on September 3rd. Aaron hung around in the bigs upon his late season acquisition, making 3 scoreless appearances in 2 2/3 innings. He won the 5th spot in the A's rotation out of camp in 2019, but struggled to the tune of a 5.14 ERA in 15 games (6 starts). He was claimed on waivers by the miserable Baltimore Orioles at the beginning of July and did not fare much better, with a 4-5, 6.18 mark in 14 games (12 starts) to finish the year. In November, Brooks was released to sign with the Kia Tigers of the KBO.