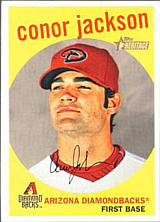 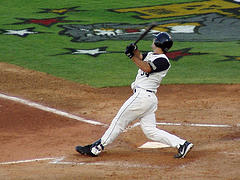 Jackson hit .200 in 40 games in the majors in 2005, but came on strong in 2006, hitting .291 with 15 home runs. The next season, 2007, he hit the same number of homers, but his average dipped slightly to .284. In 2008, he hit an even .300 in 144 games, with 31 doubles and 12 homers. He scored a career-high 87 runs and drove in 75 in what was his best overall season. Unfortunately, health issues struck him in 2009, and he was limited to 30 games, hitting .182. He was feeling weak and placed on the disabled list on May 12th, when he was diagnosed with valley fever. He did not come back to the big leagues that season, as an attempted rehabilitation stint in the minors proved unimpressive. He did play in the winter leagues though, hitting a solid .425 in 23 games for the Leones del Escogido, proving he had kicked the disease. He started 2010 back with Arizona, but went on the disabled list three times that year, twice with a hamstring injury, then with an abdominal strain, was traded to the Oakland Athletics afterwards, then saw his season end in early September with a sports hernia. Overall, he hit only .236 in 60 games in what was a second consecutive lost season.

Jackson was acquired by the Boston Red Sox in the last days of August 2011, to give the team added depth with regular right fielder J.D. Drew likely out for the season. In his first start at Fenway Park, on September 4th, Conor ran into Fenway's right field wall at full speed trying to catch a drive hit by the Texas Rangers' Ian Kinsler. He injured his wrist and knee and had to leave the game. He had started the season with the A's, hitting .246 with 4 homers in 105 games, as he was healthy for the first time in three years. He hit .158 in 12 games for the Red Sox. Jackson spent 2012 in the Chicago White Sox organization, with the Charlotte Knights of the International League, after going to spring training with the Texas Rangers. He hit .277/.363/.434 in 88 games for Charlotte but did not return to the majors. He then was injured for most of 2013 after signing with the Baltimore Orioles in the offseason. He played only 9 games for the Norfolk Tides, hitting .200, and announced his retirement on April 14, 2013.

Jackson's father, John M. Jackson, is an actor, best known for a recurring role on JAG and its spinoff series, NCIS. Conor has appeared in an episode of the television soap opera General Hospital, playing a physical therapist.