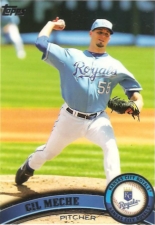 Gil Meche had a 6.23 ERA for the US in the 1995 World Junior Championship, the worst mark on the staff. The US still won Gold.

Meche was drafted in the 1st round of the 1996 amateur draft by the Seattle Mariners.

In 2010, Gil Meche made over $11 million for the Kansas City Royals, despite not winning a single game for them. On July 27th, it was announced that he would have to have surgery on his right shoulder, ending his season with an 0-5 mark.

Meche announced his retirement in January of 2011, citing his health and leaving $12 million behind.