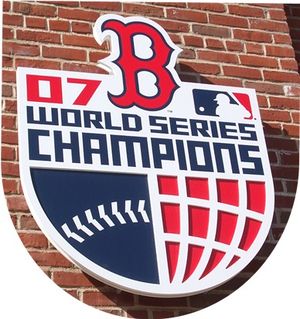 The 2007 Boston Red Sox won their first AL East Division title since 1995, putting an end to a string of nine consecutive division titles by their arch-rivals, the New York Yankees. More importantly, the Red Sox won their second World Series Championship in four years, sweeping the upstart Colorado Rockies, but only after snatching victory from the jaws of defeat against the AL Central Champion Cleveland Indians, coming back from a 3-games-to-1 deficit to win the ALCS in 7 games, eerily similar to the miraculous 2004 comeback against the Yankees.

After a very disappointing season in 2006, which saw the team spin out of contention and into third place in the AL East in August and September, the Red Sox were very active in the off-season. They signed prize Japanese pitcher Daisuke Matsuzaka with a record $51.1 million bid on the posting system, in order to keep him away from their rivals from the Bronx. They also picked up a second Japanese pitcher, reliever Hideki Okajima, who although less-heralded than his teammate, became a key member of the bullpen. Matsuzaka was expected to anchor the team's starting rotation, but although he was solid (he ended the season at 15-12, 4.40), he was outshined by two holdovers: Josh Beckett had the type of dominating season everyone had been expecting since he was chosen second overall by the Florida Marlins in the 1999 amateur draft, going 20-7, 3.27 with 194 Ks, and veteran knuckleballer Tim Wakefield started the season extremely strong before seeing his ERA rise inexorably in the second half of the season to reach 4.76, to go with his 17-12 record. Another veteran starter, Curt Schilling, had more difficulty, battling injuries and age throughout a lackluster year (9-8, 3.87). The bullpen, built around closer Jonathan Papelbon (37 saves, 1.85) and veteran Mike Timlin (3.42), was solid, but the real surprise was Okajima, whose unorthodox delivery and remarkable consistency for most of the year not only got him his first All-Star selection as a rookie (he won the Monster All-Star Final Vote), but also was used as a closer at times when Papelbon was not available.

On the offensive side of things, the Red Sox changed their middle infield in the off-season, signing free agent shortstop Julio Lugo and inserting top prospect Dustin Pedroia at second base. Pedroia had an outstanding rookie season, hitting .317 with 39 doubles, but Lugo was a major disappointment with the bat (.237/.294/.349). This could normally have been overcome, but with CF Coco Crisp (.268, 86 OPS+) and RF J.D. Drew (.270 with 11 home runs), acquired to replace departed outfielder Trot Nixon, both having down years at the plate, C Jason Varitek bouncing back only slightly from his weak 2006 production (.255, 17 HR, 68 RBI), and the team's two big sluggers, LF Manny Ramirez (.296, 20 HR) and DH David Ortiz (.332, 35 HR, 117 RBI), falling short of the staggering heights attained in previous years, the Red Sox were at times seriously lacking for offense. Their two biggest threats were the corner men, 1B Kevin Youkilis who added some power (35 doubles and 16 HR) to his expected excellent on-base percentage (.390), and 3B Mike Lowell who added 40 points of batting average (.324) to his usual solid production, and set a record for RBI by a Sox third baseman with 120 as a result. Youkilis also earned a Gold Glove for his play at first base. By September, top center field prospect, Jacoby Ellsbury was playing regularly in the outfield and providing a much-needed additional bat to the line-up, hitting .353 in 33 games.

The Red Sox got off to a hot start under the leadership of manager Terry Francona, taking sole possession of first place on April 18 while the New York Yankees were sputtering around .500, and failing to detach themselves from the Toronto Blue Jays and Baltimore Orioles while falling all the way to 14½ games behind the Red Sox on May 29. Boston built a huge early lead that at one point reached 12 games on July 5 as they sported the best record in Major League Baseball. However, the Yankees found their footing after stabilizing their pitching staff, while the Red Sox moved to a lower gear. The Red Sox still had a 9-game lead over their rivals in late August, but the Yankees swept a series in Yankee Stadium as the month came to an end, and kept on winning, eventually closing to within one and a half games of Boston on their way to securing the AL Wild Card. During this time, Red Sox fans were haunted by memories of the infamous 1978 collapse with poor performances by trading-deadline acquisition Eric Gagne and other members of the pitching staff. However, the Red Sox, no doubt boosted by Clay Buchholz's no-hitter in only his second MLB start, accomplished their goal on September 28th, finally winning their first AL East Division Championship since 1995 with a win over the Minnesota Twins in which Matsuzaka pitched a spectacular game, and then the whole team watched as the Orioles tied the Yankees in the bottom of the 9th off closer Mariano Rivera, then won the game in extra innings.

The Red Sox then moved on to the playoffs, where they first faced the Los Angeles Angels of Anaheim, who had played them tough in the regular season. The Red Sox easily swept the Angels, starting behind Josh Beckett's complete-game effort in Game 1, a 4-0 Red Sox win. Game 2 saw Manny Ramirez's first ever walk-off home run in the playoffs as Boston kept rolling, winning 6-3. Game 3 was no contest, with the Boston offense surging to an easy 9-1 win and a great performance from Curt Schilling.

Next came the American League Championship Series, where the Red Sox had to face the Cleveland Indians, led by the tough pitching of eventual Cy Young Award winner C.C. Sabathia and Fausto Carmona. The Red Sox pounced on Sabathia in Game 1, winning 10-3 and seeing another stellar performance from Beckett. However, Boston then faltered, losing three straight games. Missed opportunities cost the Red Sox in Game 2, losing that one 13-6 in extra innings. Game 3 saw the Boston offense get chances, but be ultimately stymied by sinkerballer Jake Westbrook, 4-2. Game 4 saw ALDS hero Paul Byrd again frustrate the opposition, and with Tim Wakefield still not fully recovered from shoulder problems, the Indians took a commanding 3-games-to-1 series lead.

Game 5 saw the rematch of Beckett and Sabathia. The result was the same. Beckett shined through 7 innings, only giving up one run, and the Red Sox cruised 7-1. Game 6 saw a game that could have been close, but unlikely hero J.D. Drew belted a 2-out first inning grand slam off Carmona to set the tone, and the Red Sox again won easily, 12-2. Game 7 was a different story. Daisuke Matsuzaka, struggling since the All-Star Break, gutted his way through 5 innings, and Westbrook was again instrumental in keeping the Red Sox offense at bay. owever, the normally reliable Rafael Betancourt and other members of the Indians bullpen finally caved to the pressure, and the Red Sox clinched a spot in the World Series at home, winning 11-2. Beckett took home the ALCS MVP award for his two dominating pitching performances.

In the World Series against the well-rested Colorado Rockies, the Red Sox pounced on lefty Jeff Francis in a rainy Game 1, and Beckett was sharp again, going 7 innings as Boston won easily, 13-1. Game 2 saw possible future star Ubaldo Jimenez pitch stride for stride with Curt Schilling, but the Boston bullpen, anchored by 2⅓ outstanding innings from Hideki Okajima and Jonathan Papelbon's first career pickoff netted the Red Sox a win, 2-1. In Game 3 in Colorado, the Red Sox jumped on veteran Josh Fogg early, and Boston starter Matsuzaka helped his own cause by knocking in 2 runs himself, as the Red Sox cruised, 10-5. Game 4 saw a clutch moment from retread Bobby Kielty, as he hit what proved to be the game-winning home run. Jon Lester, who was diagnosed with lymphoma just barely a year before, picked up the win for the Red Sox, ending his storybook season. Mike Lowell was named World Series MVP. 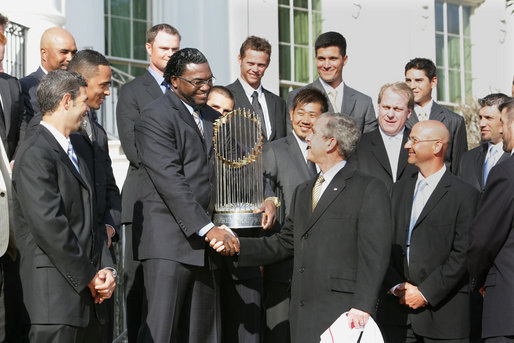