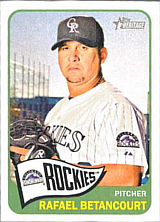 Rafael Betancourt was the sixth player to be suspended by MLB for performance enhancing drugs. Then with the Cleveland Indians, he drew a 10 day pop on July 8, 2005. A reliever in twelve seasons split almost evenly between the Indians and Colorado Rockies, Betancourt's best season was his 2007 campaign out of the Tribe bullpen. In 68 appearances that year, he was 5-1 with a sparkling 1.47 ERA, 0.76 WHIP and 9/80 BB/K ratio for the AL Central champs. He later recorded a career best 31 saves and a 2.81 ERA out of the Rockie bullpen in 2012.