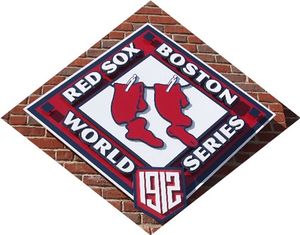 The 1912 Boston Red Sox were one of the best major league teams ever, winning 105 games and losing only 47. It is the most wins by a Red Sox team in a season in the 20th century, as the number would not be passed until the 2018 season, but over 162 games. It was the first season in which the Sox played at Fenway Park.

The team played at least .600 ball in every month and by June 10th was in first place to stay. In league match-ups, they beat every team except the Cleveland Naps, whom they tied 11-11. The Red Sox ended up winning the pennant by 14 games over the Washington Senators.

The team was led by the magnificent effort of Tris Speaker, who hit .383, had an on-base percentage of .464 (which led the league) and a slugging percentage of .567. Speaker led the league with 53 doubles, at the time an American League record which would last until 1923 when broken by Speaker himself. He led the league in home runs with 10 and his 52 stolen bases were tops on the team.

The second best batter, in BA and OBP and SLG, was second baseman Larry Gardner, who also led the team in triples. RF Harry Hooper was second on the team behind Speaker in runs scored, while LF Duffy Lewis led the team with 109 RBI.

The pitchers were led by Smoky Joe Wood with a record of 34-5. Buck O'Brien and Hugh Bedient both won 20 games while Charley Hall went 15-8 and Ray Collins was 13-8. Eddie Cicotte, appearing in 9 games, went 1-3.

Player-manager Jake Stahl hit .301 at first base and managed the team to his only pennant and World Series win in his four-year major league managing career. None of his other three teams finished above .500. The year was also Stahl's last as a regular player.

In 1913 the Red Sox would drop to fourth place and ace pitcher Wood would appear in only 23 games. By 1918, Wood would be a regular outfielder playing for Cleveland. Speaker and Hooper would end up in the Hall of Fame while Gardner would have a long career, reuniting with Wood on the Cleveland Indians.

Account of the first game at Fenway Park on April 20