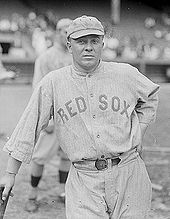 Olaf Henriksen is the only player born in Denmark to play in the Major Leagues. He played seven seasons in major league baseball during the dead ball era. He appeared in 321 games with 487 at-bats, but appeared in only 128 games in the field. His specialty was on-base percentage - with the second highest rookie OBP of all time (minimum 100 plate appearances, and since 1900) of .449. He bettered that the next year with a .457. Although he had little power, his lifetime OBP was .392 - quite useful in dead ball days when baserunners were scarce. His batting average was excellent during the first three seasons, but then fell off sharply.

He hit a key double in the final game of the 1912 World Series. He also appeared in the 1915 and 1916 Series, all for the Boston Red Sox . Henriksen was in his fourth season with Boston when rookie pitcher Babe Ruth came up. He once pinch-hit for Ruth, in 1916, and ... drew a walk.