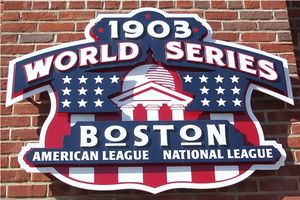 A number of sources claim that the team was known as the "Boston Pilgrims", but it was not so. One or two newspapers did occasionally used the name "Pilgrims" in 1907. However, the team actually never had a name but was most commonly referred to as the "Bostons" or the "Americans." In December 1908, the team was officially named the Boston Red Sox.

Before winning the World Series, Boston won its first American League pennant that season. They did it by having the best offence in the league, combined with a solid pitching staff that for the first time was not just a one-man show by the great Cy Young. Off course, Young had a great year, going 28-9 with an ERA of 2.08 in 341 2/3 innings, but the team was also great when he wasn't on the mound, going 63-38 in games in which he was not involved in the decision. The support staff included two twenty-game winners in Bill Dinneen (21-13) and Long Tom Hughes (20-7). Two other pitchers saw regular action - Norwood Gibson (13-9) and George Winter (9-8) - while young Nick Altrock, who was sold to the Chicago White Sox on July 2nd, was the only other man to take the mound all season, making one losing start on June 30th.