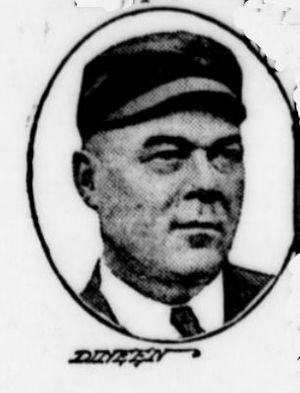 Bill Dineen pitched in the majors for 12 years, and then umpired even longer. He pitched the first shutout in the World Series, blanking the Pittsburgh Pirates on three hits in Game 2 of the 1903 World Series while pitching for the Boston Americans. He pitched another shutout in Game 8, on his way to beating the Pirates three times during the Series. He made his first Baseball Card appearance in the rare 1903 E107 Breisch Williams set.

He was the only MLB player to play and umpire in a no-hitter. He pitched one no-no in his career, then he umped a no-hitter after his playing career.

He was born William Henry Dinneen, but the spelling Dineen was more commonly used during his career.

A site about baseball in Weedsport, NY indicates that former major leaguer Jay Faatz recommended Dineen in 1895 to the manager of the Weedsport team. When Toronto came through to play an exhibition game, they liked what they saw and signed Dineen. Source: Baseball in Weedsport.