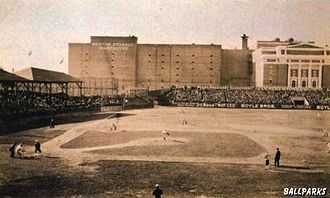 The first home of the Boston Red Sox, Huntington Avenue Baseball Grounds was located in a poor Irish district of Boston on a former circus site. Just across the tracks of the New York, New Haven & Hartford Railroad from the Braves' home, South End Grounds, the ballpark was surrounded by factories, breweries, warehouses, and stables. The park was made up of three light gray cement grandstands, rickety wooden bleachers, and a 300-foot-long covered lobby. The outfield was very misshapen, with a 635 foot deep centerfield, and featured hip-high weeds, patches of sand where grass would not grow, and a toolshed in play in the uphill sloping centerfield.

The Red Sox, who did not go by that nickname until 1907 and are usually referred to as the "Boston Americans" during their first few seasons, fielded an excellent team in their first seasons. In 1903, they won the American League pennant, leading the league in home runs along the way, despite their park's immense center field.

The stadium was the site of the first World Series game between the modern American and National leagues in October, 1903. The Americans hosted the Pittsburgh Pirates here in the first four World Series games ever played, and ended up winning the series five games to three. The following season, on May 5, 1904, Cy Young pitched the first perfect game of the 20th Century.

On June 24, 1911, Red Sox President John J. Taylor announced a new park of concrete was to be built for the Red Sox, and the team played their last game here at the end of the season before moving to Fenway Park in 1912.

Today, Tufts Medical College and a Northeastern University athletic building are on the park's former site, as well as the World Series Exhibit Room in Cabot Cage, which housed mementos of the early Red Sox. A plaque marking the rightfield foul pole's location was dedicated in May 1956.