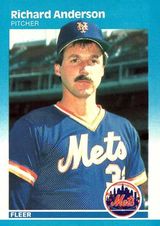 Selected by the New York Mets in the 24th round of the 1978 amateur draft, pitcher Rick Anderson played 11 years of pro ball, with cups of coffee in the majors in his final three seasons. While attending the University of Washington, Rick pitched a 10-inning no-hitter. On May 12, 1979, pitching for the Jackson Mets, he threw a no-hitter against the Shreveport Captains. With the AAA Tidewater Tides over a six-year period, Rick set a team record by pitching in 193 games.

After his playing career ended, Anderson joined the Minnesota Twins organization, where he served as a minor league pitching coach for thirteen seasons. He was promoted to the big league coaching staff in 2002, staying until the end of the 2014 season, when he was dismissed along with long-time manager Ron Gardenhire. He teamed up again with Gardenhire in 2018, when he was hired as the bullpen coach of the Detroit Tigers. He quickly had to take over as interim pitching coach as Chris Bosio was sidelined with an undisclosed medical issue two weeks into the season. On June 27th, Bosio, who had returned in the meantime, was fired for making "insentitive comments" in violation of team policy and Rick was named pitching coach on a full-time basis.