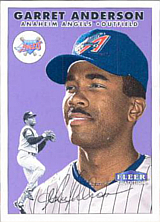 Garret Anderson is the all-time leader in hits (2,368), RBI (1,292) and doubles (489) for the Angels, covering their years as the Los Angeles, California and Anaheim Angels. He has the longest hitting streak in Angels history, hitting safely in 28 straight games in 1998.

Anderson set an Angels franchise record when he drove in 10 runs on August 21, 2007, in a game against the New York Yankees. Anderson doubled in Chone Figgins and Orlando Cabrera in the 1st against Mike Mussina. In the 2nd, he doubled home Vladimir Guerrero. In the 3rd, he cracked a three-run homer against Edwar Ramirez. In the 6th he hit a grand slam off Sean Henn. He was the last major league player with a ten-RBI game until Anthony Rendon in 2017. Also that season, Anderson set an Angels record with 11 straight games with a RBI, surpassing the 10 accomplished in the 1980s by both Fred Lynn and Wally Joyner.

He was an excellent all-around hitter, with six seasons of batting over .300, five with 39 or more doubles, including back-to-back in years in which he led the American League in 2002 and 2003, and five straight seasons of hitting 20+ home runs, with a high of 35 in 2000. While he never scored 100 runs in a season, he had five straight season of scoring over 80 runs, and another of 79 runs, and he drove in over 100 runs four times, and twice more reached 90 RBIs. His only flaw was that he did not draw many walks, with a career high of just 38. As a result, in spite of an excellent career batting average of .293, his OBP is a pedestrian .324. Still, his OPS+ was usually over 100, and just below that in most of the years when he failed to reach the mark. He was selected for the All-Star Game three times and was named the MVP of the contest in 2003.

After playing for the Angels from 1994 to 2008, and being one of the key players on their only World Series-winning team in 2002, he became a free agent and signed with the Atlanta Braves in 2009. In 2010, he signed with the Los Angeles Dodgers. Expected to be mostly a pinch-hitter, injuries gave him more playing time but he did not respond well, hitting only .181 in 155 at-bats. He was designated for assignment on August 8th. After going unclaimed and with no contract offers for the 2011 season, Anderson announced his retirement on March 1, 2011. In 2016, Anderson gained entrance to the Angels Hall of Fame.