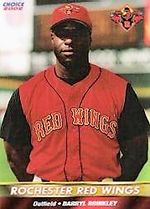 From 1981-2006, only one Winter League Player of the Year did not make it to the major leagues and then only missed due to a national tragedy. That was Darryl Brinkley, who had not even played in the affiliated minors until he got a shot after one fine winter. Brinkley was undrafted out of college (where he hit .529 as a senior) and went to play in Hoofdklasse for two years (winning the MVP Award his second year, 1992), followed by a season in Italy's Serie A1. In Italy, he hit .462/.545/.708 and stole 16 bases in 18 tries in 18 games. He scored 18 runs and drove home 16.

That winter, Brinkley hit .342, second to Dmitri Young in the Mexican Pacific League. He led the LMP in steals (29, five more than runner-up Mike Cameron), hits (76) and runs (46) as the sparkplug for the first-place Hermosillo Orange Growers. Hermosillo fell in the playoffs and Brinkley joined the Culiacan Tomato Growers for the 1996 Caribbean Series and helped them to the title by hitting .350, scoring five and driving in six. He was named the Caribbean Series MVP and named to the Baseball America Winter League All-Star team, as well as winning Winter League Player of the Year honors.

Darryl slipped in winter play in 1997-98, hitting .284 for Mexicali, but leading the LMP in runs (46). He tied Matt Stark and Brad Seitzer for the most hits (67), homered 11 times, one fewer than leader Bubba Smith and stole 13. He hit .375 for the Mazatlan Deer as an added player in the 1998 Caribbean Series and was the only Mexican player on the All-Tournament team, joining Luis Polonia and Magglio Ordonez in the outfield.

In '01, Brinkley hit .293 for Campeche and the Yucatan Lions in Mexico and .306/.308/.556 in 9 games with Rochester. The Orioles called Brinkley to have him join the club but he was out of town and did not get the message in time to make travel arrangements before the terrorist attacks of September 11, 2001. When baseball resumed, Baltimore no longer had need for Darryl's services. He returned to Rochester again and the 34-year-old had a .285/.317/.405 line. Showing a surprising return to speed, he stole 19 in 24 tries.

Brinkley hit .400 and slugged .590 for Calgary in 2007. He became the first .400 hitter in the modern Northern League, thanks in part to a 9-for-13 finish. He stole 18 bases and led the Northern League in OBP, runs (88) and hits. He was named Northern League MVP and Baseball America Independent League Player of the Year. He also played for the Pastora de los Llanos of the Venezuelan Winter League that year as well.

In 2008, he hit .293 in 14 games with the Bridgeport Bluefish of the Atlantic League and .351 in 82 games with the Calgary Vipers of the Golden Baseball League. He hit a combined eight home runs and stole 32 bases.

Brinkley was voted into the Caribbean Baseball Hall of Fame in 2018 in a class with Jaime Orozco and Cornelio Garcia (he led the voting with 16 of 19 ballots). He had hit .331 in five Caribbean Series; he was only the 6th player from the US to win entry and the first in 12 years.