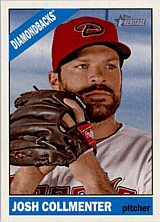 Josh Collmenter rode an unorthodox delivery to 38 big league wins and a 3.64 ERA in parts of seven seasons.

Collmenter threw completely over the top. As he wound up, it seemed that he was trying to throw the ball straight upwards, but his wrist broke at the last moment. He threw towards the plate with surprisingly good control but not much velocity, topping out at 87 mph. All things considered, he had an excellent change-up. This delivery was fine tuned during a childhood spent throwing tomahawks with his brothers.

Josh joined the Diamondbacks' staff two weeks into the 2011 season, pitching out of the bullpen at first. He made his first start on May 14, facing the Los Angeles Dodgers and holding them scoreless for six innings to get credit for a 1-0 win; his opponent was Chad Billingsley, who gave up only one hit - a double by Stephen Drew - but Collmenter's teammates turned it into a run and he made the short lead stand. In fact, he did not give up a single run in his first 15 innings as a major league starter. He finished the season with a record of 10-10 and an excellent ERA at 3.38, pitching 154 1/3 innings with a K/BB ratio of 100/28. He started Game 3 of the NLDS against the Milwaukee Brewers, with the D-Backs down 2 games to 1, giving up a single run in 7 innings on his way to an 8-1 win. He finished 5th in voting for the Rookie of the Year, trailing Craig Kimbrel, Freddie Freeman, Vance Worley and Wilson Ramos.

It was a rough start for Collmenter in 2012. After four starts, he was 0-2 with a 9.82 ERA. He had given up a National League-leading 20 earned runs and 6 homers at that point, and ceded his spot in the starting rotation to rookie Patrick Corbin on April 30th. He managed to turn things around, ending the season with an ERA of 3.69 in 28 games and a record of 5-3. He pitched 90 1/3 innings, making 11 starts. In 2013, he pitched exclusively in relief, making 49 appearances with a record of 5-5, 3.13. His 92 innings in relief were the most in the NL. He went back to starting on April 14, 2014, after making his first four appearances out of the bullpen; in the last of these, he recorded his first career save with a four-inning outing in a 7-3 win over the San Francisco Giants on April 9th. His first start in almost two years was no great shakes, as he gave up 3 runs in 4 innings against the New York Mets and was charged with a 7-3 loss. He lost again the next time out, but kept his spot in the rotation and began to pitch better. That culminated on May 29th when he pitched his first shutout in defeating the Cincinnati Reds, 4-0. He faced the minimum 27 batters, giving up three hits as all base runners were erased on double plays, including Brayan Pena who was thrown out at third trying to advance on a fly out after hitting a lead off double in the 3rd. He was the first D-Backs pitchers to face the minimum number of batters since Randy Johnson pitched a perfect game on May 18, 2004, and he needed only 94 pitches to complete the gem. He improved to 4-2, 3.34 on the year. He finished the year with an 11-9 record, 3.46 ERA and 115 strikeouts in 179 1/3 innings.

Josh was a swingman in 2015, making 44 appearances with 12 starts and a 4-6, 3.79 record. On April 17, he pitched his only other big league shutout, taking down the San Francisco Giants with just four hits in a victory at AT&T Park. The D'backs released Josh at the trading deadline in 2016, making 3 starts with the Atlanta Braves in September, then finishing his MLB career with 11 appearances and a 9.00 ERA in 2017. In 2018, he joined the expansion Auckland Tuatara of the Australian Baseball League, returning in 2019.