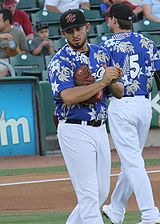 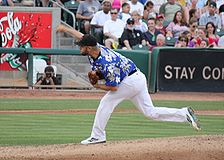 Billings was 8-5 with a 1.25 ERA as a high school senior while hitting .308/.406/.505, to earn team MVP honors. As a college freshman, he was 6-1 with a 4.68 ERA. In 2005, the sophomore was 6-5 with a 3.85 ERA. He held opponents to a .229 average and struck out 112 in 107 2/3 innings. He led the Mountain West Conference in strikeouts, was third in ERA and took home Pitcher of the Year honors, beating out Daniel Ray Herrera and Alex Hinshaw, among others. He had a 2-3, 2.62 ERA that summer for the Wareham Gatemen of the Cape Cod League. Bruce was 6-3 with a 3.43 ERA as a junior, again averaging over a strikeout per frame. He was third in the MWC in ERA behind Herrera and Jake Arrieta and joined them as the All-Conference starters. The Philadelphia Phillies took him in the 31st round of the 2006 amateur draft but did not sign him. In 2007, the right-hander fell to 4-4, 4.48 but broke the SDSU career strikeout record while freshman Stephen Strasburg replaced him as the staff ace. The Colorado Rockies chose him in the 30th round of the 2007 amateur draft; the scout was Todd Blyleven.

The San Diego native turned in an excellent pro debut with the Tri-City Dust Devils, going 4-2 with a 2.97 ERA. His .208 opponent average was lowest in the Northwest League and his ERA was second to Josh Collmenter. In the league finals, he was called on to start game three against the Salem-Keizer Volcanoes but dropped the decision and Tri-City wound up finishing second. Billings was named the NWL's #13 prospect by Baseball America, between Corey Brown and Cory Riordan. With the 2008 Asheville Tourists, Bruce was 9-11 with a 4.13 ERA. He was third in the South Atlantic League with 144 strikeouts and threw a no-hitter on July 23 against the Lakewood BlueClaws. In '09, he had a 6-10, 4.17 record for the Modesto Nuts but missed a month with injury. He fanned 122 in 99 1/3 innings.

For 2010, Billings was assigned to the Tulsa Drillers and improved to 11-6, 3.28. He had one streak of 39 consecutive scoreless innings, breaking a 60-year-old Tulsa record held by Jim Blackburn. He finished tied for third in the Texas League in wins and allowed only a .217 average in his AA debut. Had he qualified, he would have ranked 7th in ERA. Batting for the first time in his pro career, he went 5 for 14 with a double and a homer. That year, he was also put on Team USA's roster for the 2010 Pan American Qualifying Tournament. He began 2011 in the minors before getting the call by the Rox in May to take Jorge de la Rosa's roster spot. A month after his debut, he was dealt to the Oakland A's for second baseman Mark Ellis. After three appearances with the big league club, he spent the next two seasons with the Triple A Sacramento River Cats. He made his final big league appearance with the 2014 New York Yankees, striking out 7 while allowing 4 runs in 4 innings. He finished his career with three seasons (2016 to 2018) pitching in the Chinese Professional Baseball League, going 26-28 with a 5.00 ERA. He led the 2016 CPBL with 172 strikeouts, 13 ahead of runner-up Mike Loree.

Billings became a coach with the GCL Phillies West in 2019.