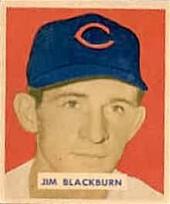 The Cincinnati Reds signed 6'4" right-hander Jim Blackburn as an amateur free agent in 1941 and sent the 17-year-old youngster to the Class D Cordele Reds for his first look at pro baseball. "Bones", as he was sometimes called, appeared in 11 games, going 1-3, his first year out. He was with the the Cordele team again in 1942, this time going 8-11 with a 3.76 ERA. In 1943, he was with the AA Syracuse Chiefs going 0-3 in 13 games before being called into the Armed Forces. During World War II Jim spent 1944 through 1945 serving as a squad leader with the 7th Armored Infantry Battalion in the European theater of operations. He was wounded during the Battle of the Bulge and taken prisoner from December 23, 1944 until he was liberated by the 69th Infantry Division in April 1945. He was flown back to the United States and, after a long stay in a Cleveland hospital, he was ready for spring training.

On his return in 1946, Jim was back on the ball field with the Class A Columbia Reds, winning 10 and losing 8 with a 3.10 ERA. "Bones" also spent 1947 and 1948 with the Columbia team, getting his first chance with the Reds at the tail end of the 1948 season. He then went back to the minors, spending three seasons with the AA Tulsa Oilers, and got one more look at big league hitters at the tail end of 1951. Blackburn's two short spells with the Cincinnati Reds did not prove very eventful, as he only appeared in 18 games out of the bullpen, pitching 36 innings and going 0-2 with a 5.50 ERA. Jim spent two more seasons in the minors before deciding on other fields of endeavor. He spent eleven active seasons in pro ball, putting up respectable numbers for members of his trade. "Bones" appeared in 199 minor league games, going 71-70 in 1,214 innings while allowing 1,148 hits and 529 walks for a 3.94 ERA. Jim's best year was in 1950 when he went 21-7 with a 2.73 ERA for the Tulsa Oilers.

A professional archer who once had won the Ohio State Field Archery Championship, Jim was an archery instructor in the Hamilton County Parks Department and also an athletic consultant for the Coca-Cola Bottling Company in Cincinnati where he died October 26, 1969, at the age of 45.