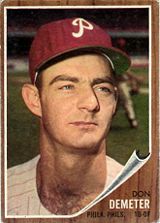 Tall, lanky Don Demeter was an outfielder with an 11-year major league career who hit 20 home runs four times. He also played over 100 games at third base and at first base.

He was a regular on the 1959 Los Angeles Dodgers team that won the World Series. In the Series, he batted sixth in the order or was a late-inning replacement.

His best year came with the Philadelphia Phillies in 1962, when he was in the top ten in the National League in batting average, slugging percentage, home runs, and RBI. He led the league in sacrifice flies, and was second in the league in hit-by-pitch.

He was the main target in the Detroit Tigers' trade of future Hall of Famer Jim Bunning to the Phillies after the 1963 season. The development of young outfielders such as Willie Horton, Gates Brown and Jim Northrup, alongside the great Al Kaline, left no room in the Tiger outfield for him (and he failed as yet another of GM Jim Campbell's endless possibilities to oust Norm Cash from first base). Demeter was thus traded by Detroit to the Boston Red Sox for a different righthanded pitcher, Earl Wilson, on June 14, 1966.

The most similar player, according to similarity scores is his contemporary, Jim Lemon. He is the answer to this trivia question: Who replaced the great Duke Snider in center field for the Dodgers?

Don Demeter is currently a pastor in Oklahoma City, OK.