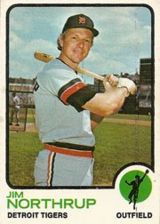 Jim Northrup played a dozen years in the majors and was a mainstay in the Detroit Tigers outfield for a decade.

After playing quarterback at Alma College, Northrup was reportedly offered contracts by the NFL's Chicago Bears and the AFL's New York Titans before he ultimately decided on a baseball career. He signed with the Tigers and began his career in 1961. After hitting .312 with 18 home runs with the Syracuse Chiefs in 1964, he earned a September call-up with Detroit and was in the majors to stay.

Northrup became a regular for the Tigers in 1966, and in 1968 he hit 20 homers while driving in 90 runs, third-best in the American League at the height of the second dead-ball era. That year, he hit four grand slam home runs, including two in one game on June 24th against the Cleveland Indians at Cleveland Stadium; he hit another one on June 29th to become the first player to hit three in one week. He added another slam in Game 6 of the World Series on October 9th. However, his most famous hit came in Game 7 of the Series; with the game still scoreless with two out in the 7th, he hit a two-run triple off Bob Gibson over the head of center fielder Curt Flood, then later came in to score to send the Tigers to a Series-clinching 4-1 win.

Northrup had his best year at the plate in 1969, hitting .295 with 25 home runs. On August 28th of that year, he went 6-for-6 with a pair of homers and 3 RBI in a game against the Oakland Athletics. During the 1974 campaign, he was dealt to the Montreal Expos before being sold to the Baltimore Orioles about a month later. He retired after spending the 1975 season in Baltimore.

Always a dangerous hitter, Northrup was never an All-Star, as he was overshadowed on the Tigers by greater stars such as Hall of Famer Al Kaline, outfielder Willie Horton, first baseman Norm Cash and catcher Bill Freehan. He still managed to hit 153 homers and drive in 610 runs, with a .267 batting average.

After his playing career ended, Northrup spent a decade as a Tigers television broadcaster. He also played professional softball for a couple of seasons alongside former teammate Cash. He was inducted in the Michigan Sports Hall of Fame in 2000. He died of complications from Alzheimer's disease in 2011.