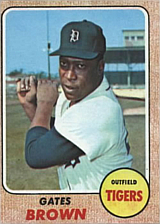 Brown had been a bit of a juvenile delinquent as a youth, serving time for burglary at the Ohio State Reformatory in Mansfield, OH as a teenager. His talent at baseball helped to set him straight in life and ultimately got him paroled early in 1959, signing for a $7,000 bonus. By the time he was in his 30s, he served as a mentor to Ron LeFlore, who also spent some time in prison before making it in baseball with the Tigers.

Although seldom used as a regular, Brown was a great fan favorite during his thirteen-year career, all spent as a member of the Detroit Tigers. He once stated to this writer that during the 1968 World Series, he was secretly eating two hot dogs on the bench when manager Mayo Smith suddenly and unexpectedly called him to pinch hit with one stuffed in his jersey. After getting a base hit, the catsup from the hot dog bled through his jersey as he stood on base. (Note that the story could not have happened during the World Series, as he went 0 for 1, but occurred on August 7, 1968, as documented in other sources).

Gates was a regular for only one season, 1964, when he hit .272 with 22 doubles and 15 homers in 123 games as the Tigers' left fielder. The Tigers had a surplus of quality outfielders at the time, with Al Kaline, Jim Northrup, Willie Horton and Mickey Stanley all vying for playing time, and Brown was not much of a fielder, so he moved into a backup role. In 1971, he had a great batting line in limited playing time - .338/.408/.549 in 82 games for a 164 OPS+. As a result, he got a little more playing time in 1972, as manager Billy Martin shuffled his outfielders around in leading the Tigers to the AL East title. He got 252 at-bats that year, his first time over 200 since 1965, but only got three plate appearances in the ALCS, managing to draw a walk and score a run. In 1973, he was the Tigers' first regular DH, hitting .236 with 12 homers in 377 at-bats - the second-most of his career at age 34. He played for two more seasons, but almost exclusively as a pinch-hitter, only playing the field once - a game in left field in 1973 - in the last three seasons of his career.

After retiring following the 1975 season, he was a Tigers coach from 1978 to 1984. In 1989, he became manager of the Orlando Juice of the Senior Professional Baseball Association. He coached at Tiger Fantasy Camp in Lakeland, FL and was treated royally. He passed away in 2013 from a heart attack, only a few days after the Tigers clinched a division title.