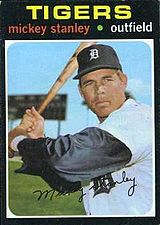 Mickey Stanley played with the Detroit Tigers for his entire 15-year major league career. Though not blessed with a great bat or outstanding speed, he was a stellar and sure-handed center fielder, winning four Gold Gloves. In the 1968 World Series, Tigers manager Mayo Smith moved him from center field to shortstop, even though Stanley had almost never played the position as a professional. The Tigers' regular shortstops that season, Ray Oyler and Tom Matchick, had hit .135 and .203 respectively, while the team had four healthy outfielders: Al Kaline, Willie Horton, Jim Northrup and Stanley. Smith figured that the very athletic Stanley could handle the position switch and that the moderate offensive upgrade was worth the risk. Although Stanley handled only a few routine fielding opportunities during the Series, it was one of the most unusual World Series managerial moves of all-time. The Tigers beat the St. Louis Cardinals in seven games.