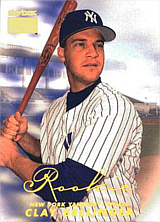 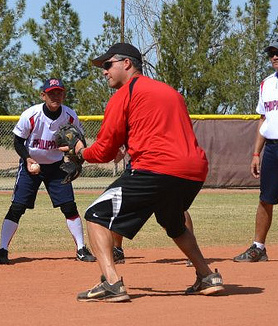 While Clay Bellinger's big league numbers as a bit player with the New York Yankees and Anaheim Angels were bested in short order by his son Cody, he did win two World Series rings as a contributor to the 1999 and 2000 Yankee championship teams and cameo'd with the 2002 Angels in April, who won it all that October. Cody is still looking for his first.

Clay hoed a long road to the majors, spending 10 years in the minors with the San Francisco Giants, Baltimore Orioles and Yankees organizations before making the Yanks Opening Day roster in 1999. Back in the O's organization for his final season in 2004, he was recruited by Peter Angelos to represent Greece at the 2004 Athens Olympic Games. He was also listed on their roster for the 2005 European Championship but did not play due to a bureaucratic delay on his passport.

Bellinger coached first base for the Chandler, AZ team in the 2007 Little League World Series; Cody was one of the team's stars. Cody, of course, was later selected by the Los Angeles Dodgers in the fourth round of the 2013 amateur draft and made his big league debut in 2017. In 2019, he was named National League Most Valuable Player. A second son, Cole, was selected by the San Diego Padres in the 15th round of the 2017 amateur draft.