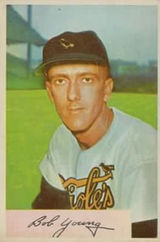 Left-handed-hitting second baseman Bobby Young was signed by the St. Louis Cardinals as an amateur free agent before the 1946 season. The 21-year-old infielder was assigned to the Allentown Cardinals of the class B Interstate League and hit .347 in 128 games. He spent both 1947 and 1948 in the International League with the Rochester Red Wings, having two good seasons. He got his first look at Sportsman's Park with the Cardinals in 1948, getting into three games late in the year, with no results,.

Bobby went back to the minors after his short stay with the Cardinals and on June 11, 1949, he was traded to the St. Louis Browns in return for Don Richmond. Bobby spen the remainder of 1949 and all of the 1950 season with his hometown Baltimore Orioles AAA club of the IL, setting a league record of 329 consecutive chances in 60 games at second base without an error.

Bobby got his second shot at being a major leaguer with the Browns as he became the team's everyday second sacker from 1951 to 1953. Young had hit a career-high .260 as a rookie in 1951. On April 23, 1952, he hit a 1st-inning triple off Bob Feller and scored the game's only run in a battle of one-hitters between the Hall of Famer-to-be for the Cleveland Indians and Bob Cain for the Browns. A year later, on April 16, 1953, his 7th-inning double was the only hit against Billy Pierce in a 1-0 loss to the Chicago White Sox in which Harry Brecheen gave up only two base hits.

Bobby was the last second baseman in St. Louis Browns history and became the first one for the new major league Baltimore Orioles when the Browns moved east in 1954. Young was also the first player inked to a contract by Baltimore.

Young was traded to the Cleveland Indians during the 1955 season and was last in the big leagues with the Philadelphia Phillies in 1958, ending his eight-year major league run with a .249 hitting average and a .980 fielding percentage. He had spent 12 seasons in pro ball (1946-1958) and during his tenure in the minor leagues he appeared in 960 contests, hitting at a .291 pace.

After baseball Young owned a janitorial service and was in the construction business in Baltimore, MD where he died on February, 1985, at the age of 60.