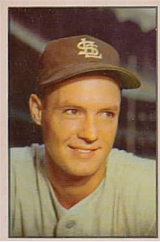 "I laughed a little bit but I was a little angry. I'd have given my right arm just to have gotten one strike on him. Swift kept trying to encourage me to get the ball lower. Veeck had told Gaedel that he would shoot him if he swung at a pitch, but it looked like he was itching to swing if I'd gotten the ball any lower. But I walked him..." - Bob Cain, to Danny Peary, We Played The Game

Bob Cain was a key component of Major League Baseball's most bizarre moment on August 19, 1951. He was the starting pitcher for the Detroit Tigers when Eddie Gaedel stepped up to the plate as a pinch-hitter to lead off the game for the St. Louis Browns. Bob could not contain his laughter as he walked the 3' 7" Gaedel on four pitches.

Bob was the only baseball figure present at Eddie Gaedel's funeral in Chicago in 1961. He was a retired salesman for Kraft Foods when he died on April 7, 1997 at age 72 in Cleveland. His death was noted in the national wire stories because of his famous duel with Gaedel.