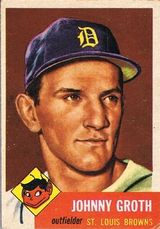 Lauded by the Detroit Tigers as "the next DiMaggio" when he arrived on the major league scene in 1946 at age 20, the popular Johnny Groth spent 11 years with Detroit. Though never coming close to living up to the hype, the slick-fielding Groth showed great promise during his first three full seasons by hitting .300 or slightly less and accumulating a high on-base percentage - twice over 40 percent.

A graceful and sure-handed flychaser who compiled a solid .279 career batting average, Groth's successful 15-year career in The Bigs favorably compares to contemporary Jimmy Piersall. A line-drive contact hitter, he displayed relatively little power, however, hitting only 60 career homers (11 of them coming during his first full season in 1949) - perhaps explaining why he spent only brief tenures with talent-starved teams (the St. Louis Browns, Washington Senators and Kansas City Athletics).

After his playing days, Groth managed the 1961 Decatur Commodores and 1962 Montgomery Rebels. He has continued to reside in his hometown Chicago, IL area. It is noteworthy that Groth scored the last run in St. Louis Browns' history in September, 1953.