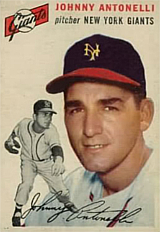 "I've never seen a kid with so much equipment. The most unusual thing is he knows what to do with it." - Hall of Famer Carl Hubbell

Johnny Antonelli came to the majors as a bonus baby and pitched in the big leagues for twelve years, starring with the New York Giants / San Francisco Giants from 1954 to 1959

After throwing five no-hitters as a high school senior at Jefferson High School in Rochester, New York, Antonelli was highly scouted and signed with the Boston Braves as an 18-year-old for a $65,000 bonus in 1948. His presence on the Braves roster caused issues for manager Billy Southworth, who did not want him there and only played him sparingly, and star pitcher Johnny Sain, who was angered by Antonelli's large contract and threatened a walkout. He was the first player born in the 1930s to appear in a major league game. After three seasons in the majors, Antonelli was drafted into the military in 1951 and missed two years due to service in the Korean War. He returned to the Braves, now in Milwaukee, in 1953 and went 12-12.

Before the 1954 season, Antonelli was traded to the New York Giants for Bobby Thomson. He immediately made an impact with the club, going 21-7 and leading the National League with a 2.30 ERA in his first year with the Giants. In that fall's World Series, he went 1-0 with a save in 2 appearances as the Giants won the world championship. Antonelli won 20 games in 1956 and made the All-Star team for four straight years. After struggling in 1960, he was traded to the Cleveland Indians, and after half a season there, he was sent back to the Braves. After the 1961 season, he was sold to the expansion New York Mets but opted to retire instead.

He later returned to upstate New York where he ran a chain of Firestone tire stores. He died there in 2020, at the age of 89.