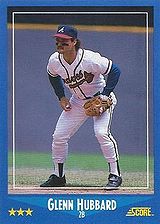 Glenn Hubbard played 12 major league seasons as a second baseman, starting off with the Atlanta Braves from 1978 to 1987, and then with the Oakland Athletics in 1988 and 1989. He was only 20 when he came up in July of 1978, just after Bob Horner had joined the team after being the number one overall pick in the 1978 amateur draft, and played regularly from that point forward.

He made the All-Star team in 1983 and played in the 1988 World Series with the A's against the Los Angeles Dodgers. However, he was released by the A's at the end of July in 1989, and thus missed a chance to be part of their 1989 World Series-winning team. As a player, he was a steady if unspectacular defender at second base, who usually hit around .250 with some doubles and a few walks. He had little speed, and only once was in double figures in homers, when he hit 12 in 1983. But even if power was not his forte, Braves fans remember him for a walk-off home run he hit against Gary Lucas of the San Diego Padres in the 10th inning of the second game of a doubleheader on July 27, 1982; the two-run shot gave the Braves a key 8-6 win and a sweep pf the doubleheader as they won a division title that season.

Hubbard then moved to the Kansas City Royals' organization in 2011. He was the Royals' minor league infield coordinator in 2013 and bench coach of the Lexington Legends in 2014-2019 and Columbia Fireflies in 2021.