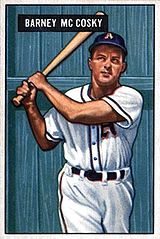 Outfielder Barney McCosky who was born in Pennsylvania but grew up in Michigan was signed by the Detroit Tigers as an amateur free agent out of high school in 1936. He spent the 1936 season with both the Charleston Senators and the Beaumont Exporters finishing the season with a combined .376 batting average. McCosky was with the Beaumont Team in both 1937 and 1938, hitting .318 and .302 respectively. These were his last games in the minors.

A left-handed hitter with a career .312 batting average from 1939 to 1953, Barney hit .311 as a rookie in 1939 and followed up with a .340 average while leading the American League in both base hits with 200 and triples with 19 in helping the Tigers to the 1940 pennant. It was McCosky's only World Series of his career and the 23-year-old played in all seven games, getting seven hits in 23 at bats for a .304 postseason average. The 1940 World Series matched the Cincinnati Reds against the Tigers, with the Reds winning the Series in seven games for their second championship, their first since their scandal-tainted victory in 1919.

McCosky came back strong in 1941, hitting at a .324 pace with 55 RBIs and again followed up in 1942 with a .293 average and 50 knocked in. There would be no pro baseball for Barney for the next three years (1943-1945) as he enlisted in the United States Navy on December 11, 1942. Barney had problems regaining his line drive stroke in 1946 and was hitting just .198 in May when he was traded to the Philadelphia A's for third baseman George Kell. Barney regained his stroke, though, and hit .354 for the rest of the season and was well over the .300 mark in the next two years.

A displaced vertebra forced him to miss the entire 1949 season. He returned in 1950, but in his final four years he moved around to the Cincinnati Reds in 1951 and finished up his career with the Cleveland Indians from 1951 to 1953, as both his playing time and his batting average dropped off significantly.

After baseball, McCosky became a long-time automobile salesman in Dearborn, MI, and retired in Venice, FL, where he passed away September 6, 1996, at age 78.