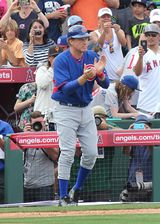 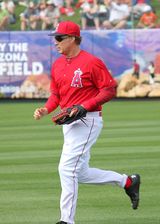 Will Ferrell is one of the most popular comic actors of his generation. An alumni of Saturday Night Live, his many films include Anchorman (2004), in which he plays television newscaster Ron Burgundy; Talladega Nights (2006) in which he plays a stock car racer; and Blades of Glory (2007), in which he plays a down-on-his-luck figure skater forced to pair up with another male skater in order to compete in the "couples" category.

While he has never played in a baseball film, his love of the game was evidenced by his throwing the ceremonial first pitch and singing Take Me Out to the Ballgame in the 7th-inning stretch at a Chicago Cubs game. He appeared in a minor league game for the Round Rock Express on May 6, 2010, as the character Billy Ray "Rojo" Johnson, throwing one pitch. It was a brushback pitch, and he was immediately ejected from the game and got into a mock fight with the batter (another actor), that included his throwing beer on his opponent - he had come to the mound sporting a large mustache, wearing gold chains and carrying a bag of beer cans which he placed in the spot where the rosin bag is usually found.

However, he entered baseball legend on March 12, 2015, when he decided to shatter Joel Youngblood's 1982 record of appearing in a game for two different teams in two cities on the same day. In a hilarious stunt performed to raise awareness and funds for the charity "Cancer for College" that helps cancer survivors to attend college, he played ten positions (including designated hitter) and even spent some time as a third base coach while suiting up for ten different teams in the Cactus League. He began the day by starting a game at shortstop for the Oakland Athletics, in tribute to Bert Campaneris, the first player to play all nine positions on the same day, back in 1965 - he even played catch with Campaneris before the game - then was quickly traded to the A's opponents, the Seattle Mariners, appearing for them in the same game at second base. And so it went for the entire crazy day, with a police escort helping to rush him from ballpark to ballpark, and even getting a helicopter to drop him in center field in Glendale, AZ so he could join that evening's game between the San Francisco Giants and Chicago White Sox just as it was winding down. Getting out of the chopper, President-like and bat in hand, he immediately stepped in as a pinch-hitter for the White Sox, managing - in the highlight of his career as a hitter - to foul off a pitch from Jean Machi, then ended his day as the Giants' catcher that same inning.

For some reason, all of the teams that acquired him that day quickly got rid of him, trading him to opponents for considerations such as a comic actor to be named later, a washing machine or a couple of hot dogs. Highlights of the day including actually fielding a ball in center field for the Los Angeles Angels and throwing an accurate relay back to the infield (he was using CF Mike Trout's cap and glove, which gave the crowd a big kick), and retiring the only batter he faced as a pitcher, for the Los Angeles Dodgers, on some sort of 55 mph off-speed pitch (the batter bunted towards the mound, and to his credit, Ferrell was able to field the ball and throw to first base in time to preserve his perfect 0.00 ERA). Less stellar was his play in left field, where, as one observer put it, he turned a single into a double and a double into a triple, and his two at-bats, in which he whiffed both times, on seven pitches (the foul ball mentioned earlier being the exception). In his first appearance as a batter, Angels manager used a defensive shift to counter his strengths as a hitter, moving all his infielders between first and second base and playing as shallow as possible. As a third base coach for the Chicago Cubs, not having had time to learn the team's signs, he instead held cardboard posters with instructions such as "Swing as hard as you can", "Ignore that last card... Play hard!", or very appropriately "Remember, these games don't count". Major League Baseball and the various teams all played along with the performance, with mlb.com and Baseball-Reference.com both creating a player page for him, or the Dodgers flashing his supposed stats from the previous season when he took the mound for them (21-2, 1.20, apparently).

The entire performance received extensive media coverage and was filmed for a special to be broadcast on HBO later in the season. That program, entitled Ferrell Takes the Field, was broadcast on September 12th.