There are nine standard positions in baseball; they are governed more by experience and traditional practice than by the rules. They are: pitcher, catcher, first baseman, second baseman, third baseman, shortstop, left fielder, center fielder and right fielder. Other positions include the designated hitter, and specialized roles such as pinch hitter and pinch runner. Despite the lack of rules on positioning, the positions have become so standardized that anything more than a minor change in players' positons is viewed as noteworthy. 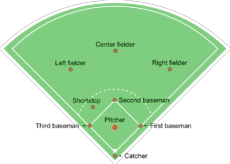 Only two players have their positions defined in the rules. The pitcher must start each play in contact with the pitcher's rubber, and the catcher must start each play in the catcher's box behind home plate. The other seven fielders may position themselves anywhere in fair territory. Experience has taught teams that the best approach is to position four infielders near the lines between first, second, and third base and three outfielders deep in the field. Both infielders and outfielders are normally spread out to avoid large gaps between them. Fielders will sometimes use a defensive shift in which they move from their normal positions for some tactical reason.

Playing all nine positions in one game[edit]

A stunt which became popular starting in the mid-1960s is for a player to play all nine positions in a single game. This is usually done to give a utility player, who plays a low-profile but useful role on a team, a chance to get in the spotlight for a day. While these players are used to playing most of the infield and outfield positions, playing catcher and pitcher can sometimes be a challenge, because of their very specialized nature. In the purest form of the stunt, the player plays a full inning at each position, with substitutions being made throughout the game to allow him to move around, although sometimes the pitching appearance is limited to a single batter, given that this takes place in a competitive game whose results count in the standings. The feat has been performed five times in the major leagues (all in the American League) and more often in the minor leagues.

The first player to pull off the feat in major league baseball was Bert Campaneris, for the Kansas City Athletics against the California Angels on September 8, 1965. He led off for Kansas City and played an inning at each position, pitching the 8th and catching the 9th. He gave up one run as a pitcher. When the game continued into extra innings, he was replaced by catcher Rene Lachemann. At the plate, he went 0 for 3 with a walk and a run scored. The Angels won the game, 5-3, in 13 innings.

On September 22, 1968, Cesar Tovar played all nine positions for the Minnesota Twins against the Oakland Athletics. Leading off, Tovar was the Twins' starting pitcher, giving up only a two-out walk to Danny Cater before moving to catcher in the 2nd inning. Campaneris was playing shortstop for the A's that day and was the first batter Tovar faced as a pitcher. He played all nine positions in order (1 through 9, according to the numbers given in keeping score) and went 1 for 3 at the plate with a walk and a run scored. Tom Hall took over for him on the mound and pitched 6 1/3 innings, getting credit for the 2-1 win.

Scott Sheldon of the Texas Rangers was next to pull off the feat, on September 6, 2000 in a 13-1 loss to the Chicago White Sox. This one was not planned, as Sheldon only entered the game as a defensive replacement for C Bill Haselman in the bottom of the 4th, with the Rangers already down, 4-1. As a result, he did not play a full inning at each position, splitting the 6th inning between SS and 2B, the 7th between RF and LF, and the 8th between CF, P and 3B. He faced only one batter, striking out Jeff Liefer. As a hitter, he was 1 for 2.

A few days later, on October 1, 2000, Shane Halter of the Detroit Tigers did it in on the last day of the season. Batting 9th against the Minnesota Twins, he started the game at 1B and played one position per inning, until pitching in the 8th when he walked the only man he faced, Matt LeCroy. He then moved to 2B, where he stayed for the remainder of the game, which was a wild affair, finishing with a score of 12-11 for Detroit. Halter went 4 for 5, scoring twice and driving in three while collecting a double and a walk. Fittingly, he scored the winning run on a single by Hal Morris in the bottom of the 9th.

On September 30, 2017, Andrew Romine performed the feat, again for the Tigers against the Twins, but on the road. He started the 7th inning as the catcher - his first career appearance at the position - and the Twins scored a run, then after he allowed a passed ball, his manager, Brad Ausmus, moved him back to second base before he could do any more damage. As a result he only played a third of an inning there. He then started the 8th inning on the mound, with the Tigers holding a 3-2 lead. He managed to force the only batter he faced, Miguel Sano, to ground out to third, then moved to first base to finish the game, which Detroit won, 3-2. He went 1 for 3 with a walk as a batter.

In Nippon Pro Baseball, the first player to play all nine positions in a game was Hiroshi Takahashi of the Nippon Ham Fighters in the second half of a September 29, 1974 doubleheader. Takahashi opened at 1B and played an inning at each position until the 9th, when he took the mound for the only time in his career (he played at least 20 games at every other position during his career, though he primarily was a catcher). He retired pitcher Tsuneo Nozaki before Hidetake Watanabe relieved.

The second NPB player to do it was Akihito Igarashi in 2000.

In winter ball, the feat has been done several times, including by Joe Hall of the Venezuelan League's Navegantes del Magallanes (1991), Tomás Pérez of Magallanes (2014) and José Lozada of the Puerto Rican League's Senadores de San Juan (12/30/14, the same date as Pérez).