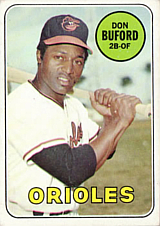 “Don Buford is the spark plug... the guy who always gets on base, who doesn’t scream or yell, but when you see him out there on a sack, you just have just got to bring him home.” - Frank Robinson, to Sport magazine, December 1968

Don Buford played ten seasons in the majors. He was typically a strong on base player with solid batting averages during a pitcher's era. In his career, he appeared in substantial numbers of games at each of left field, second base and third base. He played in three World Series, hitting four home runs in Series play, and later played four seasons in Japan.

After playing for legendary coach Rod Dedeaux at USC, Don was signed by the Chicago White Sox, who converted him from the outfield to an infielder. Named the International League MVP while playing for the Indianapolis Indians in 1963, he earned a late season call up to the White Sox. He saw considerable playing time for the Sox at second base over the next two seasons before being moved to third by manager Eddie Stanky in 1966. He swiped 51 bases that year, but his average dropped to .244. After one more season with a slightly declining batting average, he was traded to the Baltimore Orioles as part of a deal that brought Luis Aparicio back to Chicago.

The Orioles moved Buford back to the outfield, and he responded at the plate as well, scoring 99 runs in three straight years from 1969 to 1971, leading the American League in '71. He also drew a robust amount of walks during this time, with totals of 96, 109 and 89, in setting the table for the big Oriole bats like Frank Robinson and Boog Powell. In the 1969 World Series, facing Tom Seaver, Don became the first player ever to lead off Game 1 of a postseason series with a home run. The only other player to do this in a World Series was Dustin Pedroia of the Boston Red Sox against Jeff Francis in 2007. In a ten year big league career, Buford batted .264/.362/.379 with 718 runs scored and 672 walks. He grounded into just 33 double plays in 4,553 career at-bats, just 0.07% of his official trips to the plate. From 1973 to 1976, Buford played for the Nankai Hawks in Japan, earning Best Nine honors in his first two seasons.