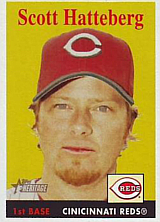 He began his major league career as a catcher for the Boston Red Sox. His career was resurrected by the Oakland Athletics as an everyday first baseman without power. He is featured in the book and feature film Moneyball, and is (at this time) the only big leaguer to have been played on the big screen by Chris Pratt. He played a key role in the A's 20-game winning streak in 2002, memorialized in both book and film, as he hit the walk-off homer that gave the A's win #20.

Injuries to his arm forced Hatteberg from the catcher position, where he had a great deal of difficulty throwing out runners. The A's, enamored with his on-base skills, moved him to first base to get him into their lineup. He was a poster boy for a player whose main skill - on-base percentage - was not valued at the time, be cause other teams only focussed on what he couldn't do (throw out baserunners or hit home runs).

In 2011-2013, Hatteberg was a Special Assistant to Baseball Operations for the Oakland A's. In 2012, he replaced Ray Fosse for 20 games on A's television broadcasts.