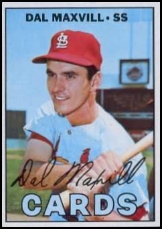 Dal Maxvill had a long major league career and later became the St. Louis Cardinals general manager for a decade.

A slick-fielding but light-hitting shortstop, Maxvill went 0 for 22 in the 1968 World Series for the St. Louis Cardinals, which is still a World Series record for futility. The previous record, 0 for 21, was set by two players in 1906: Billy Sullivan and Jimmy Sheckard.

On April 14, 1969, he hit the first ever major league grand slam home run in Canada, off Larry Jaster in the first home game played by the Montreal Expos. He was later General Manager of the Cardinals from 1985 to 1994. Maxvill is also well-remembered as one of Oakland Athletics' manager Dick Williams' four rotating second basemen. Down the pennant stretch in 1972, Williams would sometimes use four second basemen in a game (Dick Green, Tim Cullen, Ted Kubiak, and Maxvill), pinch-hitting each time one of them came to bat. Maxvill also filled in for Bert Campaneris at shortstop when Campy was suspended for hurling his bat at Detroit Tigers' pitcher Lerrin LaGrow in the 1972 ALCS.

Maxvill is the most prominent and most recent major leaguer to come out of Washington University in Saint Louis.