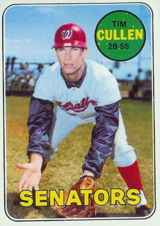 Born in San Francisco, CA, he went to both high school and college not far from his birthplace. He was a high school teammate of Jim Fregosi and Gary Hughes (scout). He then was at Santa Clara University at the same time as John Boccabella, Nelson Briles and Ernie Fazio, among others.

Cullen came up in August 1966 with the Senators and then got over 400 at-bats for Senators' manager Gil Hodges in 1967. On August 18, 1967, Tim hit a three-run homer in the bottom of the 9th to win a game for the Senators against the Kansas City Athletics. In February 1968 he was traded to the Chicago White Sox but then was traded back to the Senators in early August 1968, this time to play under manager Jim Lemon.

Under manager Ted Williams from 1969 to 1971, Tim was at first a frequently-used back-up infielder and then a regular.

He finished out his major league career as a back-up on the Oakland Athletics in 1972, after starting the season with the Iowa Oaks, and his last appearance was in post-season play that year with the A's: he went 0 for 1 in the 1972 ALCS against the Detroit Tigers but did not play in the 1972 World Series against the Cincinnati Reds. He retired after the season.

After retirement, he became a securities salesman. As of 2002, he was vice president of special projects for the Fresno Grizzlies.