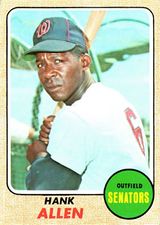 "Hank Allen threw another shock into the racing community Saturday when he saddled Sparrowvon to win the $100,000 added Tesio Stakes at Pimlico." - from The Afro-American, April 20, 1985, about Hank Allen's second career as a longtime successful horse trainer

Hank Allen, who played seven seasons in the major leagues, was a back-up outfielder with some speed but little power in the majors. In 1969, playing for the Washington Senators, he hit .277 (the team hit .251) with 12 stolen bases in 15 attempts.

Originally signed by the Philadelphia Phillies, he was sold to the Senators before the 1965 season. He broke in with them with a notable cup of coffee in 1966, hitting .387 in 9 games. Most of his career was with the Senators, who were managed by Gil Hodges, Jim Lemon and Ted Williams while he was there. He is the brother of Dick Allen and Ron Allen; he finished his major league career on the Chicago White Sox in 1972 and 1973, teams on which Dick was the biggest star.

In 2001 he became a scout, first for the Milwaukee Brewers and then for the Houston Astros.

Hank Allen Can Recognize Talent in Baseball and Thoroughbreds