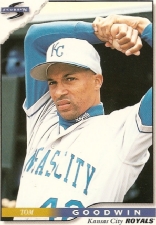 In the 1986 amateur draft, the Pittsburgh Pirates drafted Tom Goodwin - who was an outfielder - in the 6th round (134th overall). He opted not to sign. In 1988, he was a member of the gold medal-winning American team at the 1988 Olympics in Seoul. He also played for Team USA in the 1988 Baseball World Cup, hitting .250/.333/.364 with 6 steals in 9 tries, 9 runs and 2 errors in 12 games. He tied Kenji Tomashino and Julio Medina for the most stolen bases in the tournament. While at California State University, Fresno, he played baseball, basketball and football. He was a two-time All-America selection at Fresno State and he was also named to The Sporting News' college All-America team in 1989. His mother was the first African-American teacher in Fresno.

He was signed by scout Deni Pacini for the Los Angeles Dodgers after being drafted in the 1st round (22nd overall) of the 1989 amateur draft.

Goodwin developed a forte in base stealing. He ended up spending only three seasons in the minors (in all of which he stole over 45 bases) before making his Major League debut on September 1, 1991 at the age of 23.

Some of his major league career highlights include the 369 bases he stole over 14 years the with the Dodgers, Kansas City Royals, Texas Rangers, Colorado Rockies, San Francisco Giants and Chicago Cubs, a career high 66 stolen bases with the Royals in 1996, and a .294 season with the Dodgers in 1993. In 2000, not only did Goodwin hit an inside-the-park home run, he also hit two grand slams. On June 3, 2001, back with the Dodgers, Goodwin hit safely 5 times in one game. On April 5, 2002 against the Arizona Diamondbacks, he and Mark Grudzielanek) teamed up to hit the first back-to-back home runs to lead off a game in Dodgers history.

Goodwin's first home run as a member of the Chicago Cubs was a game winner on May 22, 2003. He recorded his 1,000th career hit off Mike Gallo of the Houston Astros on August 20th that season. He last played major league baseball in 2004, when he was with the Cubs, but he played in the independent Atlantic League in 2005. During his career, his weight fluctuated between a minimum of 170 pounds and a maximum of 195.

In 2012, he was appointed first base coach with the New York Mets. He stayed in the position until then end of the 2017 season. In 2018, he moved to the Boston Red Sox, also as first base coach.

The two most similar players through 2006, according to the similarity scores method, are Billy North and Darren Lewis.