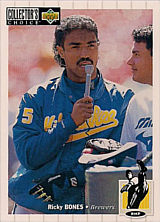 Pitcher Ricky Bones threw a rising fastball, a sinker and a variety of breaking pitches. He was a 1994 American League All-Star.

Bones had some success in the minor leagues and was the Double A Wichita Wranglers' co-player of the year in 1990. He came up to the major leagues with the San Diego Padres in 1991, then after the season was involved in a blockbuster trade that sent him to the Milwaukee Brewers, alongside Matt Mieske and Jose Valentin, for moody future superstar Gary Sheffield. Bones was never a strikeout pitcher and, in fact, allowed more walks than strikeouts in a couple of seasons as a full-time starting pitcher. Still, his philosophy of pitching to contact was effective, as he was the Brewers' representative in the All-Star Game and finished 8th in the American League in ERA in 1994. He went 10-9, 3.43 in that strike-shortened season, and won in double figures two other times, 1993 and 1995.

At the end of August 1996, he was involved in a controversial trade with the New York Yankees, who were seeking help for their push to the pennant. The Yankees sent outfielder Gerald Williams and relief pitcher Bob Wickman to Milwaukee for former Rookie of the Year Award winner Pat Listach and pitcher Graeme Lloyd on August 23rd. When it turned out Listach was injured and unable to play for the remainder of the year, the Brewers added Bones to the deal on August 29th, to allow it to go ahead. Both Lloyd and Bones were awful for the Yankees in September (Bones had a 14.14 ERA in four games), but the Yankees did win the division title and Lloyd redeemed himself in the postseason. That was not the case for Bones, who was left off the Yankees' roster, although he still earned a World Series championship ring. Bones signed as a free agent with the Cincinnati Reds before the 1997 season, but would never be able to hold a starting job in the major leagues after that. He did put in a decent season as a reliever with the Kansas City Royals in 1998, pitching 32 games with a very good 3.04 ERA, but most of the remainder of his career was spent pitching from the back end of the bullpen with the Baltimore Orioles in 1999 and the Florida Marlins in 2000 and 2001, with mediocre to poor ERAs.

In the second game of a doubleheader played August 24, 1993, (Boxscore), Ricky played one inning in right field of an extra-inning game against the Oakland A's, when second baseman Dickie Thon left due to injury in the top of the 10th and the Brewers were out of eligible position players. He was replaced in turn by designated hitter Kevin Reimer in the top of the 11th, as manager Phil Garner decided to forego the use of the DH for the remainder of the game in order to keep an acceptable defensive alignment on the field (although it still featured first baseman John Jaha manning second base). The strategy worked as relief pitcher Matt Maysey hit a two-out single in the bottom of the 13th inning to key the Brewers' game-winning rally.

Bones was a pitching coach for the Savannah Sand Gnats in 2004 and Potomac Nationals in 2005. He was a minor league pitching coach in the New York Mets organization with the St. Lucie Mets in 2006, the Binghamton Mets in 2007-2008 and Buffalo Bisons in 2009-2011. In 2012, he was named the Mets bullpen coach and stayed until the end of the 2018 season. Bones was reassigned to pitching coach of the St. Lucie Mets in 2019 but on June 20th he was promoted to bullpen coach for the major league team following the firing of Chuck Hernandez, retaining his position in 2020.